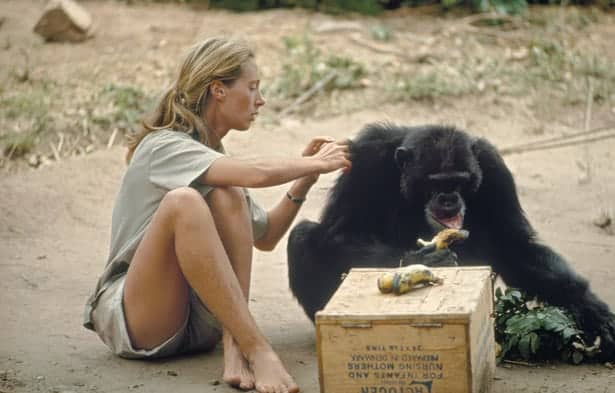 In my article about Freya Stark, I questioned what it takes to make a female adventurer. Today’s adventurer has perhaps the ultimate kudos on the adventuring scene – she changed the way we think about ourselves.

Jane Goodall doesn’t seem the powerhouse she is, when you see her. She’s a slight small woman with soft features, her hair tied in the nape of her neck and unassuming attire. She speaks gently but firmly about the effects of deforestation, the farming industry, animal testing laboratories and as I sit listening to her in a hall at the Royal Geographic Society, I know that this woman has single-handedly done more for the future of the planet than anyone I can think of.

Like many people, her life ambition started in childhood, after her mother gave her a toy chimpanzee and encouraged her growing obsession with animals. She also read Tarzan, which made clear the path she resolutely decided to follow. Although she grew up next to the sea in wartime Britain, she made up her mind that she would build a career for herself living in the forests of Africa and studying animals. Her mum inspired and encouraged her, giving her a plush toy that made her obsessed with animals, Tarzan was an addition.

At every moment, she worked towards this. Serendipitously, in 1957, when she was 18, a childhood friend invited her to stay with her parents, who had moved out to Kenya. While there, she was determined to find work and start moving in the direction of her ultimate goal. Meeting Louis Leakey presented her with this opportunity and, although she started out as his secretary, it was clear she knew an awful lot about animals and was self-taught to a very high level. 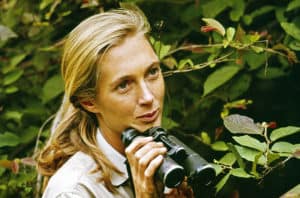 When a grant to study chimpanzees in the Gombe rainforest of Tanzania came up, she was the obvious candidate and everything had at last paid off. Her quiet determination, the time spent acquiring the knowledge to have ready to hand when the opportunity arose to prove herself. Although she had no university education and had been at Cambridge only to work as a secretary, Dr Leakey took a gamble and sent her into the forests alone (her mother joined her for the first few months then left) to study the chimps.

This was the ultimate in adventuring. She was going to live alone in the forests among the chimps. She would set out early every morning into the dense forest to a viewing point where she could sit on a rock and observe the chimps’ behaviour. She was completely and utterly alone. She had no protection. Just a notebook and pen. She wrote for hours. She watched through binoculars and recorded everything. Months later, she was able to get slightly closer to the chimps. Later still, she was able to follow discreetly behind as they went about their daily lives until they accepted her, to an extent, as a presence among them and no longer fled at the sight of her.

The book which resulted from this extended study, In The Shadow Of Man, is one of the most illuminating books I have ever read. Although what you appear to be reading about is chimps, what you realise you are actually reading about is humans and our codes of behaviour.

When one chimp greets another by kissing and hugging them, when one becomes angry and hits another then reaches out a hand to console their victim or pull them close, when an unrelated chimp adopts a baby who’s mother has died, it makes us think about ourselves. It makes us contemplate human behaviour. What would be left if you took away the ‘civilising’ features of brick houses and phones and cars? How close are chimps to what humans would be in the wild?

Jane’s big discovery was that chimps not only use tools to find food but also will adapt those tools, if necessary. This may not seem mind-blowing because the change to how we think has happened so completely that you’re probably reading this and wondering what the big deal is.

Prior to Jane’s studies, it was thought that the main difference between humans and animals was that humans make, adapt and use tools and animals do not. When Jane observed a chimp taking a stick and stripping it of leaves to make it small enough to poke into a hole to get termites out to eat, a huge shift in our entire world thinking changed. If humans are set apart from animals by their ability to make and use tools, what does it mean if animals can do it? We need a new definition of what differentiates humans and this new definition needs to recognise that we are more similar to animals than perhaps we thought. We have more in common. We are not, perhaps, the elite overseers of the earth that we once considered ourselves. What results from this is the logical next step into how we treat animals and Jane’s books about this have also trodden new ground, introduced thought processes that were previously unconsidered.

Jane decided to educate as many people as possible about the things she had seen. For many years, she has been in relentless pursuit of this goal with the same dogged determination that lead her to a life alone in the forests of Gombe. She doesn’t stay anywhere for more than three weeks and is on a plane for 300 days a year. She speaks over and over again to packed rooms about the importance of looking after the environment and the homes of our fellow creatures, about making mindful decisions when it comes to eating or purchasing make-up or any number of things. The Roots and Shoots groups that she has set up in schools and universities in 120 countries across the world continue to pursue these aims. In fact, 10% of all schools in the UK have an R&G group. It was through a close friend, who was part of the group at Cambridge University, that I came to learn about this quietly determined woman and her influence on the world.

It is now a generally accepted fact that humans and animals share many characteristics and that most animals have levels of intellect not previously known. It is also recognised that it is not acceptable behaviour to treat animals as subordinates and to do with them whatever we will. These things were borne out of a world vision that Jane formulated whilst living among the chimps and which she has shared so effectively as to have become part of mainstream thought.

If that’s not a successful adventurer, I don’t know what is! 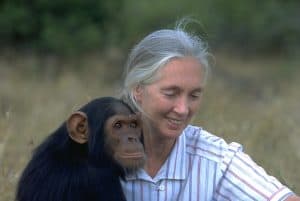