Rise of the female adventurer Part 1: Is it safe?

The world of female adventuring is not a novelty. It is not something that new-age post-Enlightenment women who want to feel empowered thought up when exploring ways to push the feminist agenda. When I say, as a female, that I am going to run 1249 miles from Rome to London, most people won’t be able to comprehend what I have just said. They will raise their eyebrows, ask how long it will take then ask why I’m doing it. A proportion of those I tell will immediately ask – “is it safe?”

Now, a few things are happening here, things so subtle that unless we pick apart the thought process and address it, will keep happening. We in England think of ourselves as a rather civilized people, I imagine. I know I certainly do. We have been through various stages in our society’s history that we are not so proud of – slavery, colonisation, world wars, suffrage, racism. While you may find in some people that attitudes of xenophobia or sexism still exist, as a country, the open display of these things are illegal. On the whole, we practise a more accepting attitude of those who differ from us.

Yet one sentence – “I’m going to run solo from Rome to London” – makes people act as though none of this progress has been made. What these people are doing, by asking about my safety, is saying that men (for it is them we are referring to) are inherently violent. A man may spend his weekend playing with his children, tending his garden, visiting the gym and spend his weeks at his 9 to 5, but once presented with a lone female on some unusual endurance feat, he loses control. The façade of his civilized existence drops away and he becomes the rapist/murderer/attacker that we all know he really is.

That is the sad thing about being asked whether I’ll be safe on my run. We are presuming that 1. Men are unsafe 2. Any interactions with men as a solo female are potentially dangerous 3. Men are unable to control their urge to violence.

I know a lot of men, as I’m sure you all do. I know no men who have been violent towards woman because that woman happened to be by herself. This in itself is no guarantee of safety but proportionally, I’d say dangers are more likely to come from other places on my run. I’m far more likely to get injured, but the number of people who have asked, “What if you get injured?” is very low. “What if you get lost?” is another, more appropriate, question as it is highly likely to happen. I’ve not been asked that.

The detrimental effect that the assumed violence of men has is felt by both sexes. While it is nice to be praised for achieving things, there is an irritating edge to the praise for having done something ‘as a woman’. “As a woman, to go out and run all that way, is fantastic.” It’s the back-handed compliment that says, how amazing that you can do things other than reproduce. As such, if a man and a woman do the same thing, run the same distance, sail the same ocean, set a new record, the emphasis is on the woman’s achievement because it is so very brave and unusual. Correct me, any men reading this, but surely your achievement is equally as fantastic? It should not be any less praised. You have trained equally as hard and suffered equally as much to reach your goals. 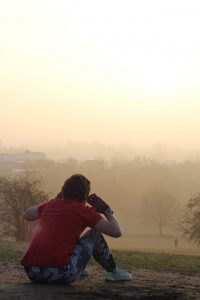 The assumed violence of men has a flipside, which is the assumed weakness of women. As the fairer sex, to do anything but powder our faces has been frowned upon in times gone by and yet, as I said earlier, female adventurers are not a new concept. We women have been striking out alone for a long time. Look up the names Amelia Earhart, Nellie Bly or Gertrude Bell to realise that powdering our faces is just one of our many skills (although we are rather good at that too).

Over the next few months before my departure for Rome, I will be taking a look at female adventurers who I admire and who’s tales of derring-do have fed the spring of my own imagination since childhood.