Lessons learned from my Arctic Challenge in the Abisko National Park 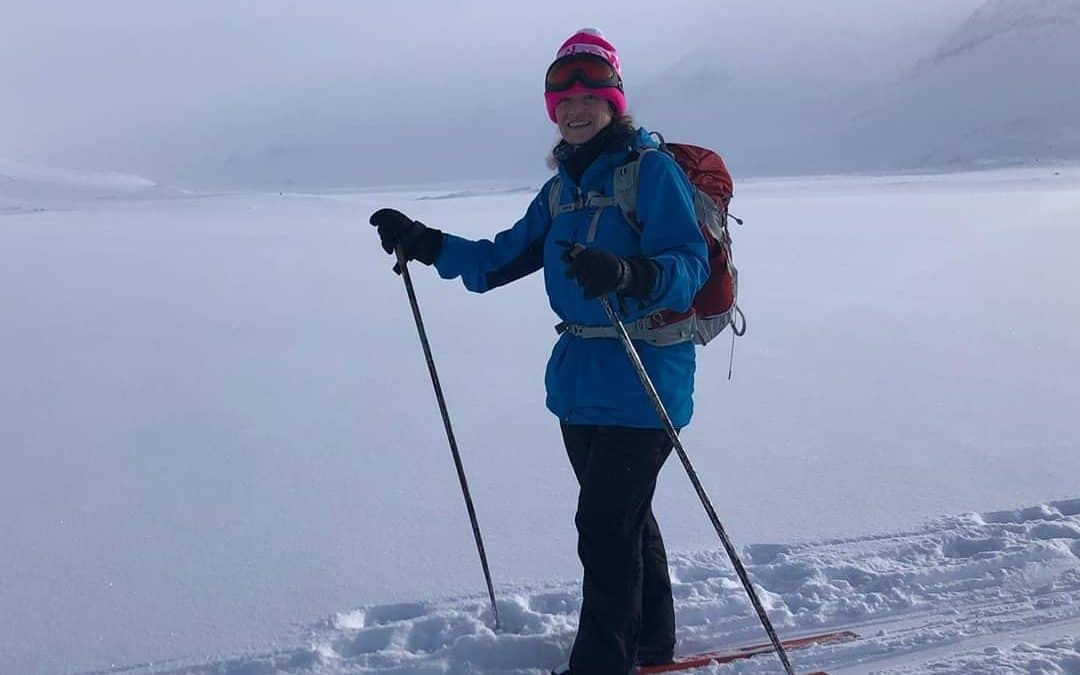 After deciding to create a ’50 at 50 2020’ challenge to raise money for Pancreatic Cancer Research, Heather Lawson set one of her challenges as a Cross Country Ski marathon across Abisko National Park in Sweden.  Here she shares her inspirational journey in seeing the beauty of Abisko, the power of team spirit to push you on, and how to cross the finish line with your head held high!

A Lesson in being present!

On 28th February, I flew to Absiko (in the sub-Arctic of Northern Sweden) to take part in a challenge to Cross Country Ski a marathon over 2 days. The challenge was organised by the charity Walk the Walk, and the trip taught me many lessons, not least that you can make amazing new friends at age of 50! This blog is about one of those lessons – being present.

For those that don’t know, The Absiko National Park is situated in the Swedish province of Lapland near the Norwegian border. It begins at the shores of Torneträsk, one of Sweden’s largest lakes where the village of Abisko is located, and extends some 15 km (9.3 mi) to the south-west. It is situated about 195 km (121 miles). north of the Arctic Circle. The area of the park is 77 km2 (30 square miles).

For thousands of years the area has been home to the Sami people, who followed herds of wild reindeer between woodlands and mountains. The national park was formed in 1909, making it one of the first in Sweden. With the advent of the railway, growing numbers of tourists found their way to Abisko and the tourist station. Artists, botanists, alpine hikers and many others have since visited the national park.

In recent years, Aurora Borealis tourism has become increasingly popular. Abisko is considered one of the best places on earth from which to view the Aurora Borealis. That’s because the area lies in the rain shadow of the Atlantic’s damp air and often has clear weather.

We had skied 10km in the morning; it should have been 6km, however like most of the challenges I have done so far, distances seem to be ‘approximate’!  I had stopped to refuel with delicious blueberry soup and homemade hummus sandwiches.

With my warm fingers and toes, my team (Team Awesome as I nicknamed them – 5 amazing women from all walks of life) clipped back into their alpine skis and we huddled around our guide Patricia to see what the afternoon had in store.

‘How far have we got to go?’ someone asked.

Patricia’s response shocked us a little as she replied, ‘You don’t need to know!”

“Tim Noakes is an eminent sports scientist, and his research has shown that people need to know, so that mentally they can prepare themselves for what lies ahead.”

All we knew was that we had 5 hours of skiing ahead of us to make the finish line. We were a team; Patricia knew this. She had heard us singing whilst we were skiing during the morning when things had got a little tough, and to take our minds off the fact that our legs didn’t want to move after skiing 22km the day before.   She had seen us pick each other up when we had hit the deck, and whatever happened our team spirit was going to get everyone to the finish line. This was Patricia’s first time leading a group on the Arctic Challenge and looking back I can see what she was trying to do.

So look up we did …and as we crossed  the frozen Tornetrask lake with perfect blue skies above us, we were rewarded with the view of a lone eagle circled above us (not a vulture as some of us joked), and the joyous views just kept on coming.  Sami huts covered in snow (useful places to hide behind when the call of nature is suddenly upon you!), and beautiful white pristine landscapes. Patricia had been right. This was a trip of a lifetime, and the only way to truly enjoy it was to be in the now, to imprint the landscape to your memory, to recall when you need to feel that space and expansiveness, and beauty.

However, Patricia wasn’t right about everything! When we set off after our lunch stop these were her words

“We have to cross the lake, which is obviously flat, there is then an uphill which is quite steep, then a downhill, then it is all flat to the finish”

When is flat, flat?

After cross country skiing across the lake, we stopped by a Sami hut to take on board some water, have a snack (and an alfresco wee if needed), then came the uphill.

Now for those that know me, I actually like hills.  I like walking them, running up them, and I actually found out that I was rather good at going up them on skis – but downhill was a different matter.

I can downhill ski.  I know how to control my downhill skis my speed, but all of this ability deserted me on alpine skis. You just have to say to yourself “just commit and go”, but trying this new technique, with a cumbersome backpack on icy downhills just became my nemesis.

I’d be at the top of a downhill and ‘commit and go’ but as soon as I was heading super-fast downhill, a  little voice would enter my head “you aren’t in control”, and as sure as hell I wasn’t; I would then end up in a crumpled heap, poles and skis akimbo!

“I know! I’ve had lots of practice, it’s about the 40th time I’ve hit the snow today and I think I am beginning to wear my core out!” I’d reply.

At this point I had to have a serious chat with myself. This Arctic Challenge was number 22 out of 50 I had planned on my 50th year, and I therefore still had another 28 to complete  – I did not want to go home in pieces, nor did I want to hold up the rest of my team longer than need be.  I made the decision to take my skis off and walk down this hill – but it was minus 17 degrees and my bindings on my boots had now  frozen to my skis  – the delicate pieces of fibreglass were now permanently attached to my feet. No amount of wriggling or stamping would release my feet, and my teammates (confident skiers) were hurtling down the hill!

The guide, Patricia, was doing all she could to release my bindings, and with a final tug and poke with a pole, my feet were finally released.  Relieved I stepped out of the binding and my foot and leg disappeared into a mammoth snow drift  – I couldn’t have made it up.  It was one of those moments I wish I had been able to capture on camera. Releasing myself from the snow like a commando, I put my skis on my shoulder.

As I sauntered down the hill taking in the views, I realised that I had perhaps made the right decision as there were various pile ups as I turned corners, and fits of giggles as people tried to stay upright. When I was finally on flatter terrain, I popped on my skis and glided beautifully for about 200m before I was confronted with yet another downhill!

The sun is setting. Where are you?

The sun was beginning to set, and still with Patricia’s words of ‘be present’ in our heads, we were now looking back at an amazing sky. Patricia was also looking back too, to see where we were as time was pressing on; we were being true to her words taking in every last moment that we could have of amazing landscape, that at times brought us to tears by its sheer vastness and beauty.

We knew that we were getting closer to civilisation as we were now sharing a track with husky sledges, snow mobiles and people who had obviously been skiing since they had popped out the womb!

We were behind schedule by an hour (or so), this we knew, but spirits were high and “ten green bottles” was keeping us going. I was chanting the Gayatri mantra from my yoga class and discussing the merits of sound healing as we kept gliding along.

A snowmobile suddenly appeared and stopped.  It was part of our support team who had come out to see where we were.

“You can put your backpacks in the back of the snowmobile if you like, you haven’t got far to go now.”

“We started with them, so we will finish with them,” was our reply in unison!

Looking up, looking back

With about one hour’s skiing ahead of us, rather than heads facing down to the finish line, it was heads facing up!  Taking in the last of the setting sun, singing to keep our spirits up and trying to stay upright on tired legs. As we rounded each turn, I knew all of Team Awesome were secretly praying for the finish line to be in sight.  We were thwarted on several occasions until we dropped down a small incline, and there in the distance we could see the lights at the finish line.

We re-grouped so that we could all go over the finished line together; Team Awesome had made it.

There were tears, hugs and whoops of joy at the removal of the skis – and a massive thank you to Patricia for a lesson in being present, being humble, of taking in the pleasure of being a tiny spec on the vastness of a white snowy wilderness and learning to live in the now.

A lesson all the more poignant as everyone had in some way been touched by a cancer story, either being a survivor, or having lost a loved one.

We are blessed to have so many women in the community happy to share their advice and stories with us. If you’d like to contribute a blog, please do get in touch via our ‘contact us’ page!