Interview with Lois Pryce; Motorcycling Around the World

Writer and keen motorcyclist, Lois Pryce, has taken her bike to all corners of the earth. Her previous motorcycle adventures include riding Iran, Brazil, London – Cape Town and Alaska-Argentina. She is also co founder of the Adventure Travel Film Festival. 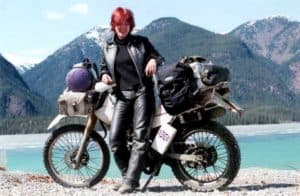 Name: Lois Pryce
Home: London
Age: 43
Environment I like the most: Desert – and anything watery!
Best place I have visited: Iran
Favourite adventure: Too many to choose from
Dream adventure: I fancy a dirt bike desert trip around Oman
Can’t go on an adventure without: A good book

How did you end up going on your first adventure?
In 2003 I had a boring office job at the BBC and had just passed my motorcycle test – it was a dangerous combination! I quit my job and left to ride my bike from Alaska to Argentina.

Where do you find inspiration for your next adventure?
I have a ridiculously extensive list of adventures on my to-do list. I just pick one! 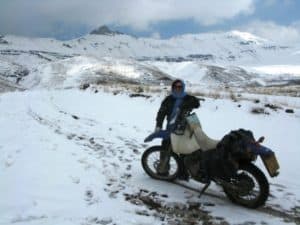 Why do you choose to explore on a motorbike?
It seemed an ideal way to see the world – you’re out in the elements, you can be slow and meandering if you want, or fast and exciting if you fancy some thrills and spills. You can literally go ANYWHERE! And there’s a great camaraderie amongst motorcyclists so it’s easy to meet people and make friends. 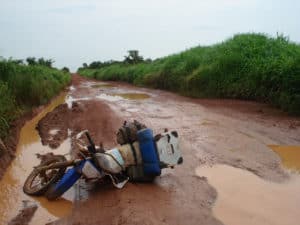 What was the toughest challenge you faced on your adventures?
On my first trip a riding companion had a near fatal crash in Bolivia – that was a very shocking experience. On my trip through Africa, I strayed into an Angolan minefield by accident which was pretty scary. In the Congo I had to face down some crazy drunk, stoned soldiers with AK47s who wanted to steal my chocolate biscuits. And in Iran the Revolutionary Guard tried to run me down – so I had to do a runner out of Tehran!

You have previously said that the best things that came out of your journeys was that you discovered what you wanted to be – a writer. What advice would you give others who want to publish their adventure stories?
Find a niche. Make your story different in some way from all the other travel blogs and books out there. And be objective – what was exciting or interesting or funny to you might not translate to the reader. 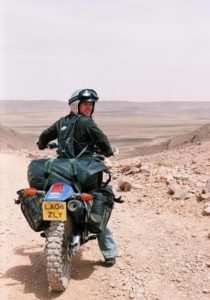 Amongst other ventures, you have founded the Adventure Travel Film Festival. Can you tell us a bit about the festival?
I set up the festival with my adventure film-maker husband, Austin Vince 6 years ago. We kept getting sent so many amazing adventure and travel films that never made it on TV or into cinemas but that still deserved an audience. So, we decided to start a film festival. It began in a field in Devon and now takes place in London, Australia and Scotland and features speakers, outdoor activities, bushcraft, film-making and travel writing workshops etc.

Readers can catch the next Adventure Travel Film Festival in London on 12-14th August. What can we expect to see there?

The festival now attracts some of the world’s most respected adventurers. Ben Fogle showed up one year, out of the blue, and this year we have comedian, Ross Noble premiering his new (very funny) motorcycle film and doing a Q&A. We also have round-the-world human-powered travel goddess, Sarah Outen MBE giving a talk and I will be ‘In Conversation’ with Elspeth Beard – the first British woman to ride a motorcycle around the world back in the early 80s – her stories are amazing. Also, going back in time… we have an amazing bunch of guys who were in a band in the 1960s and travelled the world in a double decker bus – we are showing their film as the outdoor Friday night screening, and they are bringing the bus and their instruments for a reunion! There are too many amazing films, speakers, activities etc to mention so check it all out on the website. 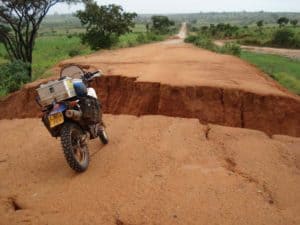 What plans have you got for the future? Any new adventures brewing?
I have just finished writing my latest book – about my solo motorcycle travels in Iran so I’ll be busy with that over the next few months but after that I’d like a watery adventure. I live on a boat so water is very close to my heart!

What would advice would you give your 10 year old self?
Keep writing those stories…