Interview with Claire Mason; Cycling from London to Japan 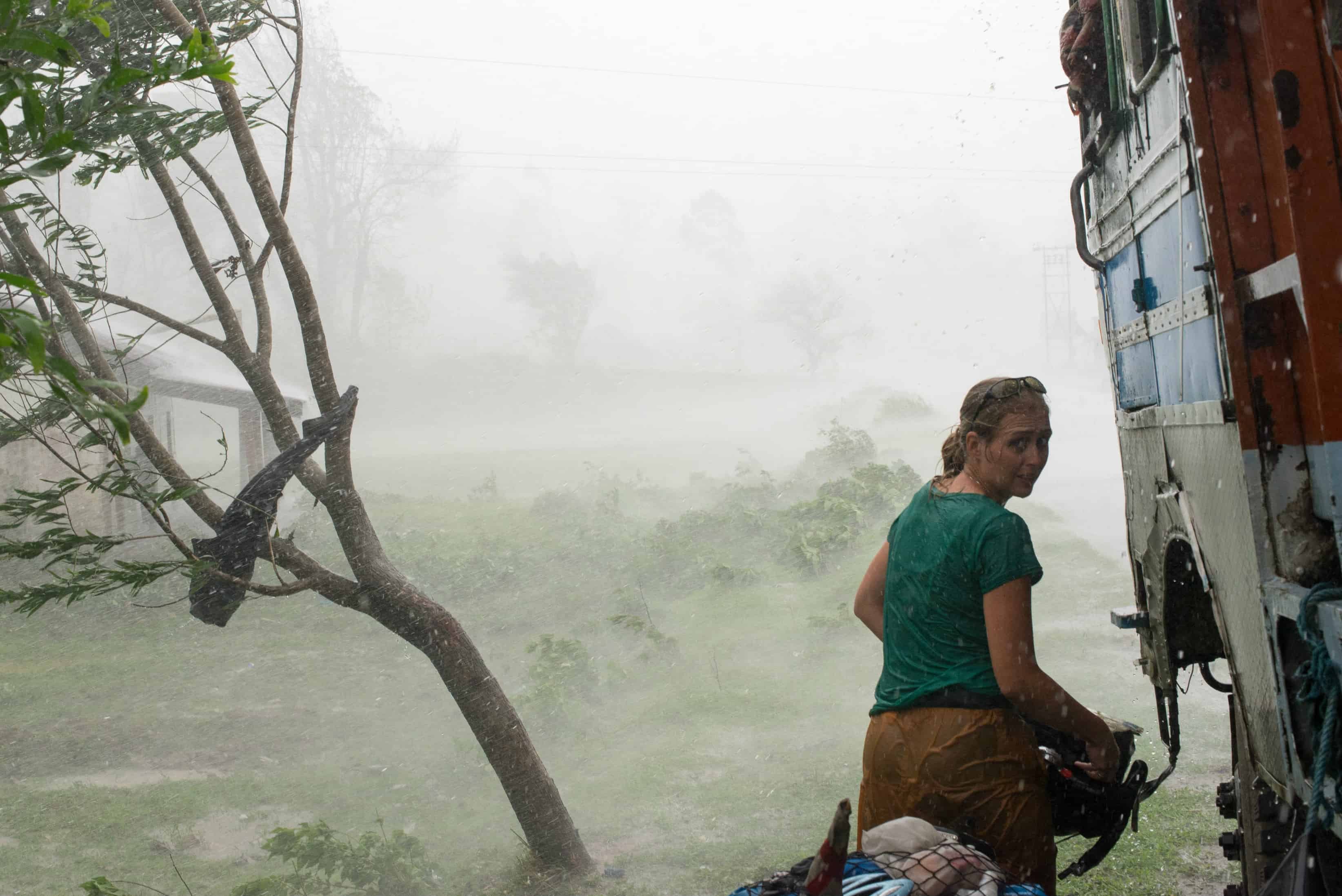 In 2014, deciding that life was getting a little stale, Claire Mason set off on an epic 20,000km cycle journey travelling from London to Japan. Now back in the UK and inspired by her journey, she has set her sights on a new adventure, kick-starting the Cycle Travel Journey. 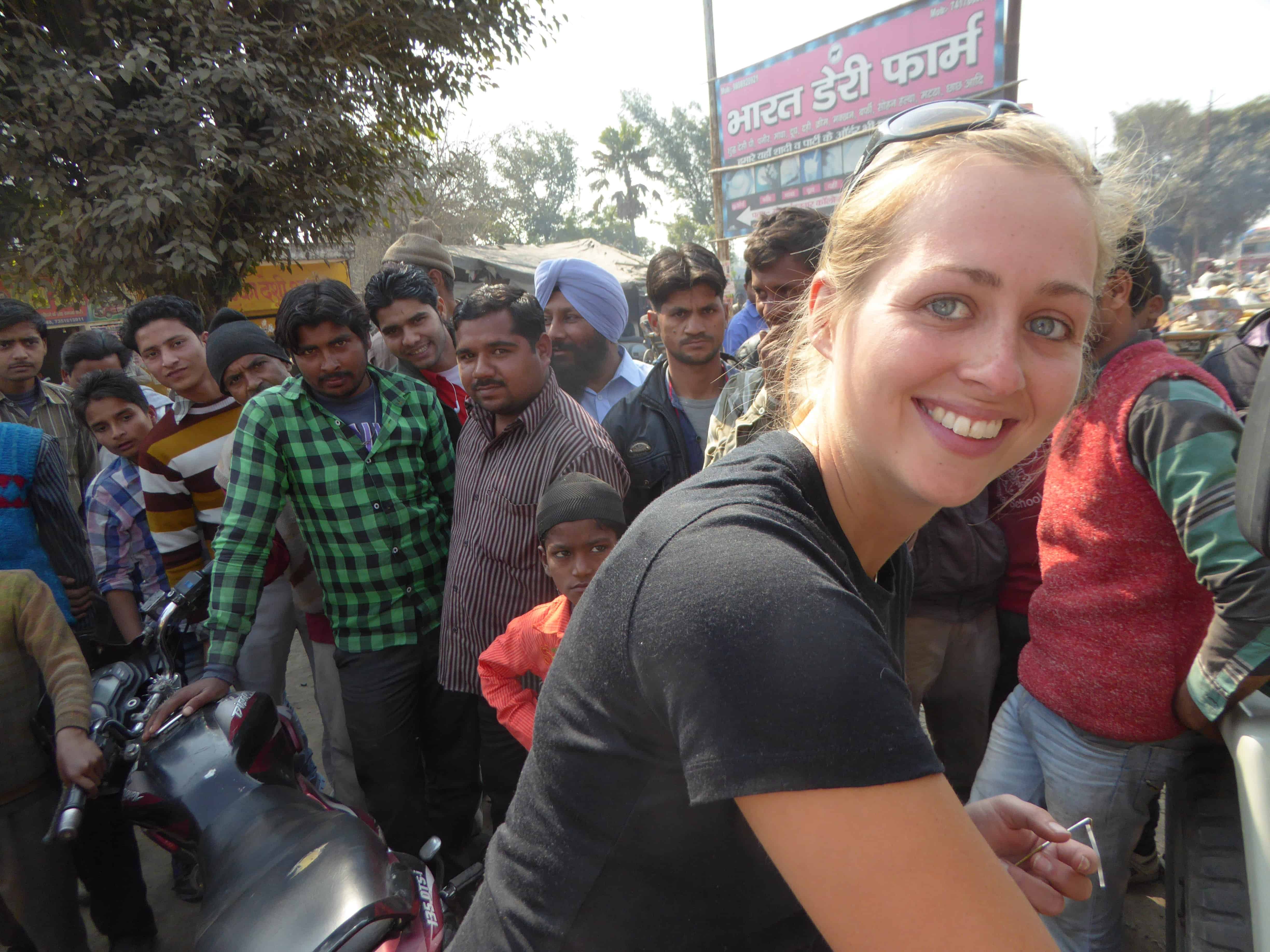 Full name: Claire Mason
Home: Near Hoxton, East London
Age: 31 – what a great age!
Environment I like the most: The ocean
Best place I’ve visited: That is a hard one, Mum and Dad’s house by the sea when I am feeling blue!
Fav adventure: My bike ride from London to Tokyo, it was awesome!
Dream adventure: Cycling around Afghanistan
Can’t go on an adventure without? My camera and my journal, I love documenting my adventures with photos and writing down all the little details I would forget otherwise.

Tell us about your big adventure?
We left London in June 2014 and cycled for 18 months through 24 different countries traversing the deserts of Oman, mountains of Nepal and jungles of Burma. We cycled roughly 20,000 kms before completing our journey in Tokyo, Japan in December 2015.

Where did the idea come from to cycle from London to Japan?
The idea started as a kind of joke. We had been on a few shorter cycle vacations, but we were always disappointed about how rushed they felt. We had also both had a strong desire to visit Japan, even before we met, and one day we just joked about cycling there. It was a crazy idea that quickly became more and more real. 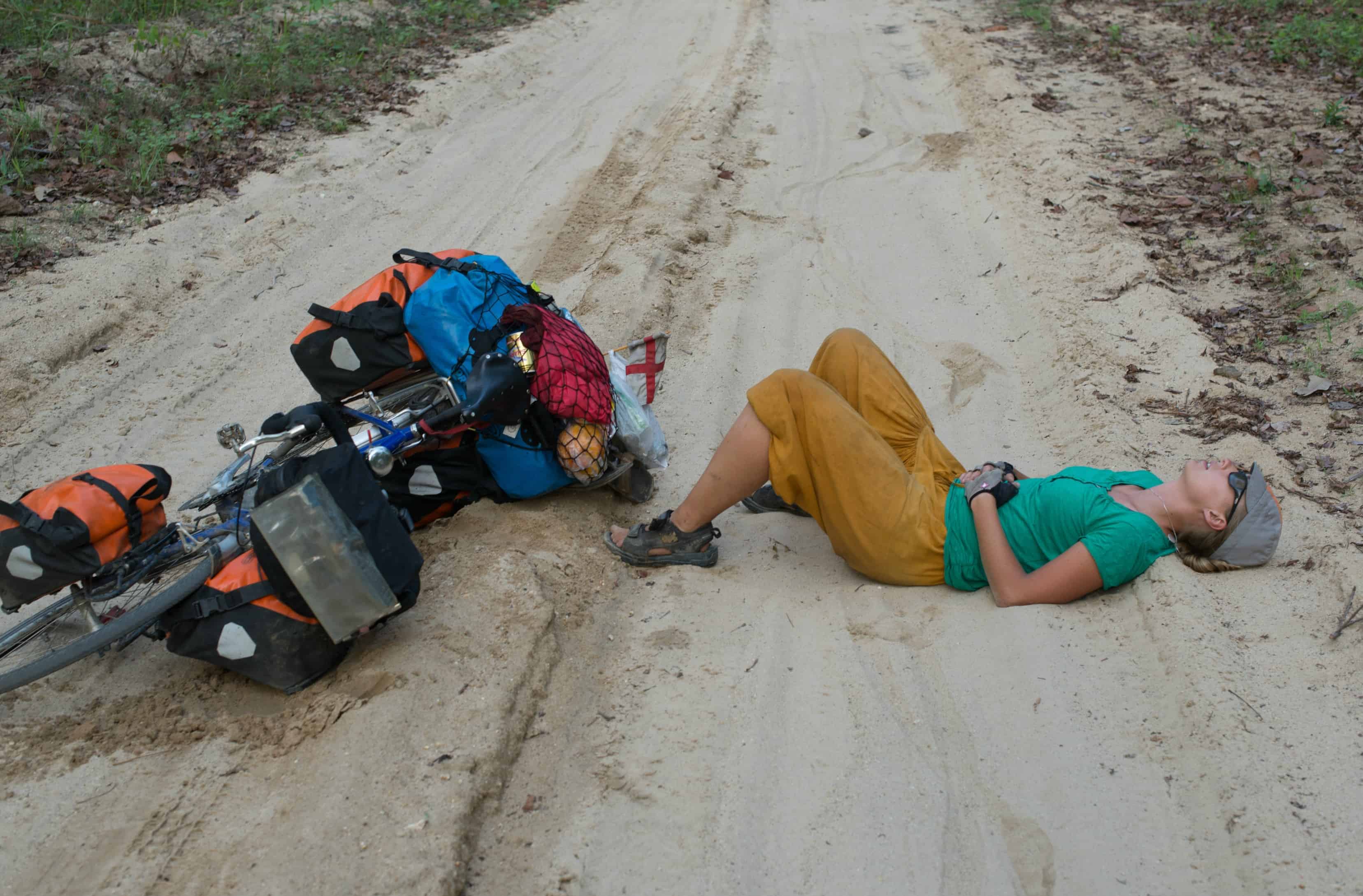 What was your motivation?
We felt life had become a little stale and we wanted an adventure! We both wanted to see more of the world and were worried that the longer we put off a trip like this the harder it would become to leave with increasing responsibilities and ties.

Had you done anything adventurous like this before?
No, not really. We had been on a couple of small bike tours, a weekend here and a weekend there. We also cycled for two weeks down the West Coast of the US and two weeks in Europe. These trips were our inspiration as although we loved them and had so much fun we always felt rushed and that they were too short. Having a flight home to catch always meant you had to have a rigid itinerary for each day, something I didn’t like very much!

You funded the trip yourself, how long did it take you to save up enough money?
The thing about cycle touring is it’s really cheap. Transport is free and so is wild camping. Nearly all our expenses are on visas, food, and sadly fizzy drinks. It took us almost a year to save up £6,000 each which was enough money to travel for 18 months – this included every expense. We originally planned to cycle for nine months but it was much cheaper than we expected and we managed to double our trip! Neither of us had particularly well-paid jobs before the trip we just cut back on everything, no more dinners out or trips to the cinema, no purchasing new clothes or holidays and we tried to buy everything for the trip second hand.

How did you go about getting sponsorship, was it difficult?
We were lucky enough to get sponsored with some equipment and clothing for our trip, and it was hard to begin with but got easier over time. I think the main piece of advice I would give anyone thinking about applying for sponsorship is…have a nice looking website with some articles already written, ideally a couple of review articles. We applied before and after creating the website – and the difference was dramatic. I don’t think we had any positive replies before the website.

Also, you have to put in quite a lot of time researching companies which can be hard whilst on the road. Another tip is that it is often good to try newer start-up companies as some of the more established ones are a little fatigued with people asking for sponsorship. It is becoming more and more common for people to request sponsorship so try and present your request from a unique angle. There are a lot of great grants that are female-specific, which is a good place to start. 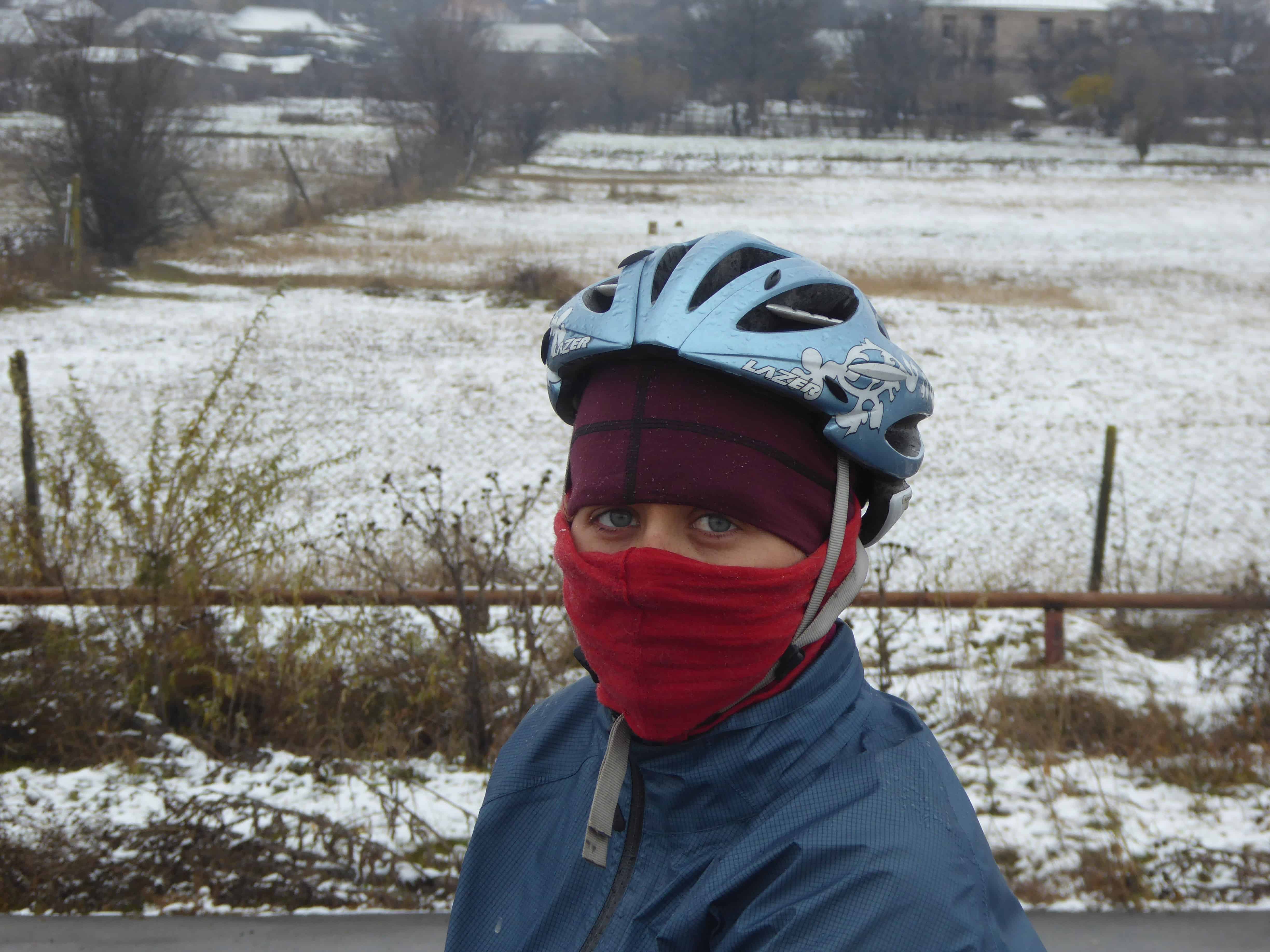 Where did you sleep each night?
I think roughly we spent 80% of the time wild camping – we love camping but we also did it this way it to save money so we could cycle for longer. We found some of the most spectacular places to camp for free – it was awesome and it has made it almost impossible to pay to stay on a campsite again! When it was cold or wet we took shelter in some strange places, schools, mosques, petrol stations, gurudwaras, churches, garages, cow sheds and even once a food truck!

Local people often offered to take us into their homes and feed us which was always a great experience as you got an insight into what life was really like in that country and it was so so interesting. We also used warmshowers, which is a fantastic website – just like couchsurfing but only for cyclists! If you don’t know about it yet you should definitely check it out. We met such lovely people through this website, some of whom we now call friends.

What came as a surprise on the trip?
I thought it would be hard to let go of certain personal hygiene lifetime habits – like showering almost every day but turned out it was really easy! I stopped wearing make up, shaving and we often went long periods of time without showering or washing our clothes. You quickly get used to your own body odour and it is really not so bad! The only thing I continued doing always was plucking my eyebrows – couldn’t give that one up. This attitude has stuck a little even now I am back in ‘civilised’ society, I don’t get as bothered if I can’t shower every day, I don’t mind wearing the same pair of socks twice and I really haven’t gotten back into the habit of shaving my legs – just seems like such an unnecessary hassle now!

The hardest part of the trip was definitely missing my family and friends. Not being home for engagement parties, parents big birthdays, pregnancy announcements and even just the simple stuff like catching up over a pint in our local was hard at times. It was also difficult to rely on one person to be your entire social support network. One person can’t fill all the roles that your friends and family used to and it can put a strain on your relationship if you don’t realise that! Spending 24 hours a day, every day with your partner was definitely hard for both of us at times but I think it strengthened our relationship in a lot of ways and was good for us too. 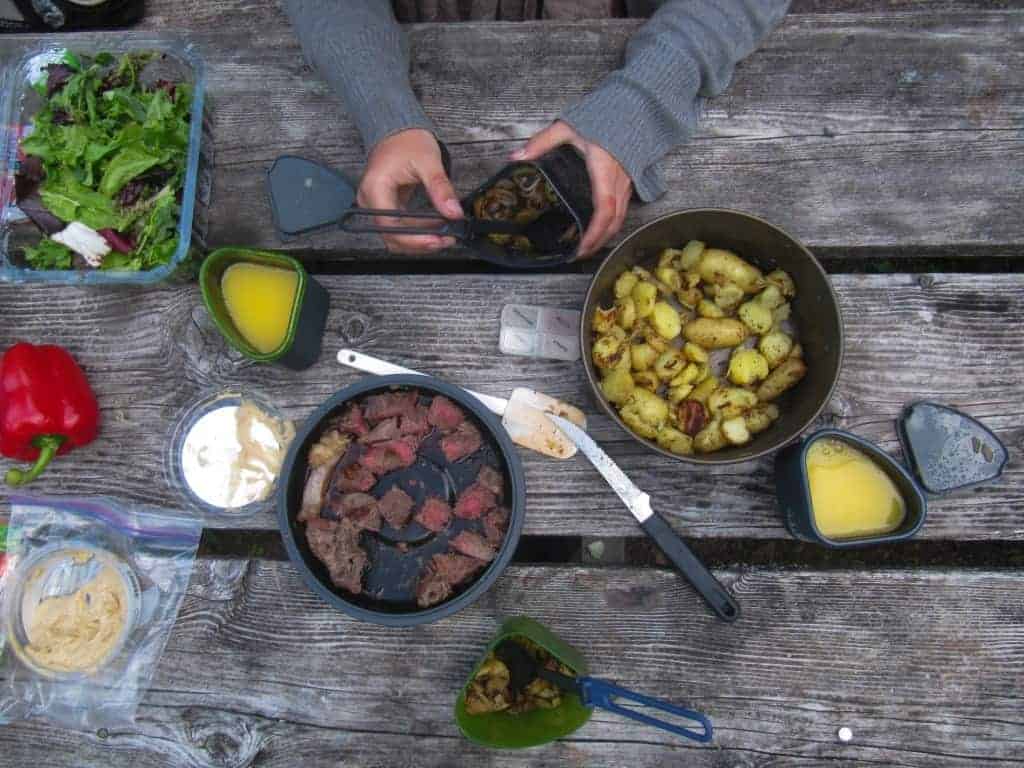 What would your advice be to your 10 year old self?
Don’t listen to anyone tell you that ‘girls don’t/shouldn’t/can’t do that!’ Because they totally can.

And stop worrying about things! Life at ten is so much fun!

What are your plans now, any more adventures?
At the moment I am just working hard to try and get my Cycling Travel Journal business off the ground – that is a big enough adventure by itself. I have never run a business before and even though this is a tiny/minuscule one it still has a steep learning curve!

Travel-wise, I am going to Scotland for 10 days to tour around in a campervan this time rather than on bikes, we will still take the bikes but for day trips rather than them being our only mode of transport. I am also going to Oman in the summer to attend the wedding of a friend we made on the bike trip. Hamed is the loveliest, most generous guy – he came up and starting chatting to us when we were lying on the side of the road in Oman resting and hiding from the midday sun! We have been firm friends ever since.