Interview with Kerry-Anne Martin; Adventures With a 6-Year-Old 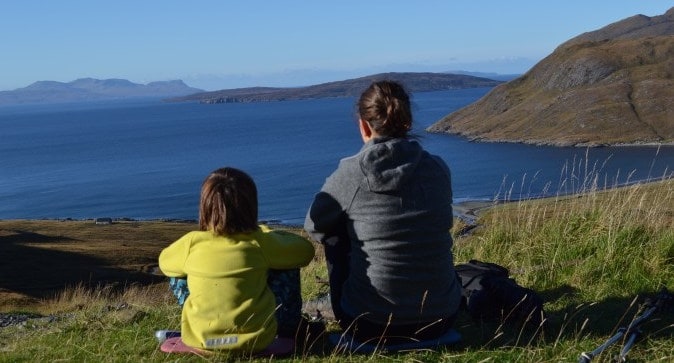 Scotland based Kerry-Anne Martin set about to rediscover the outdoors with her 6-year-old son, Finn, in tow. In 2016 she was awarded a Next Challenge Grant for her adventure – 5 bothies over 5 nights with a 5-year-old. We caught up with Kerry-Anne to discuss what life is like as an adventurer and a mother. 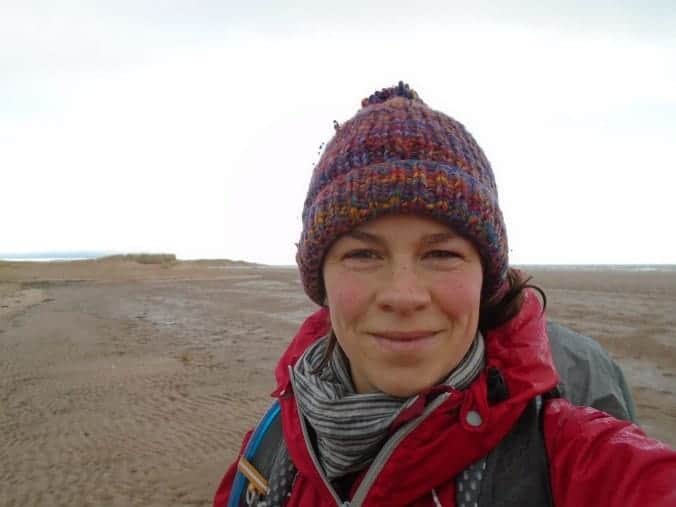 Full name: Kerry-Anne Martin
Home: Near Biggar, Southern Scotland
Age: (Almost) 38
Environment I like the most:  Islands. The perfect mix of seascape, landscape and culture.
Best place I’ve visited: Iceland. The landscape is incredible. I first visited as an undergraduate geography student when I travelled alone around the country by bus. I liked it so much I returned several times to do research for an MSc and then a PhD. That was 10 years ago and I’d love to revisit with my son in tow.
Fav adventure: In my first year of University I took a Norwegian language course for fun and decided that summer that I wanted to travel around Norway. Despite my pleading, my then boyfriend wouldn’t join me, so I reluctantly made the decision to go alone. Thank goodness! It was the best thing I could have done. I travelled the length of the country up to the North Cape, camping and staying with people I met along the way. Looking back I realise I had no idea what I was doing and only very basic, cheap equipment, however, I discovered a lot about myself including that I love travelling solo (and that it wasn’t nearly as scary as I thought it would be).
Dream adventure: An island odyssey taking in Greenland, Svalbard, South Georgia and Easter Island (for starters!)
Can’t go on an adventure without: I’m an avid reader so can’t leave home without a good book or several.

What made you decide to start going on adventures with Finn?
A combination of discovering the world of ‘Microadventures’ (through Alastair Humphreys’ book of the same name), realising they were an achievable way to have an adventure with a little one and the process of thinking through what was important to us as a family, which is nature, spending time outdoors and getting to know our local environment (and each other) better. I home educate Finn and last year made a conscious choice to make outdoor exploration and nature studies a key part of our educational philosophy. I feel passionately about introducing him to the freedom of being outdoors, the beauty of the natural world and the gratitude it inspires. Adventuring together is a great way to deepen our connection as mother and son and gives him the opportunities to evaluate risk, build his self-confidence, self-reliance, face fears, overcome challenges, learn his own limits and come to understand himself better. These benefits apply just as much to me as to him of course! 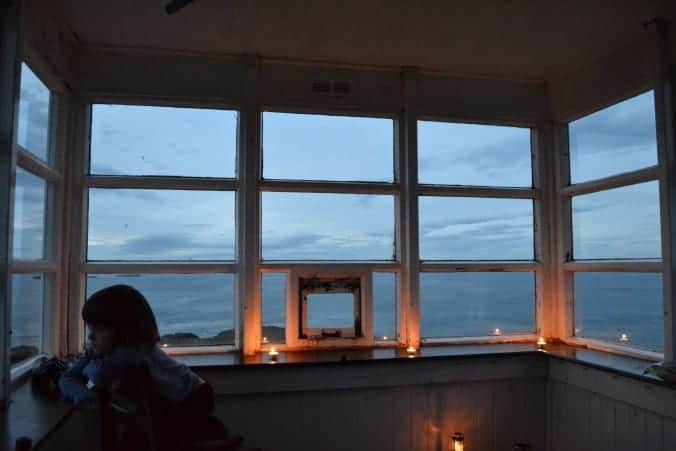 What adventures have you been on so far?
Since last summer we’ve been on a few microadventures including our very first bivvy, which we did atop a local hill, a hike in and bivvy on a lochside beach in Galloway Forest Park and a bivvy in the snow. We’ve walked to and slept in several mountain bothies across Scotland and went for a week long camping adventure by public transport in the Orkney Islands. The journey there took 13 hours by bus, train and a 6-hour ferry trip and was quite an adventure in itself!

Tell us about you 5 bothy adventure and where the idea came from?
I stumbled across Tim Moss and his Next Challenge Adventure Grant online last year so one evening I sat down and thought about what adventure I could apply for. My husband and I had taken Finn to his first bothy the year before when he was 4 and off the top of my head I came up with the idea of taking him to 5 bothies over 5 weeks while he was 5. I never really expected to win anything and had already talked myself of doing it when I found out I’d been awarded £100 towards our adventure. Then there was no backing out! I’m so glad I applied as the support we received as winners of the Next Challenge Grant really kick-started our adventures together, giving me the confidence to take Finn adventuring by myself as well as giving me the encouragement to start a blog documenting our adventures. 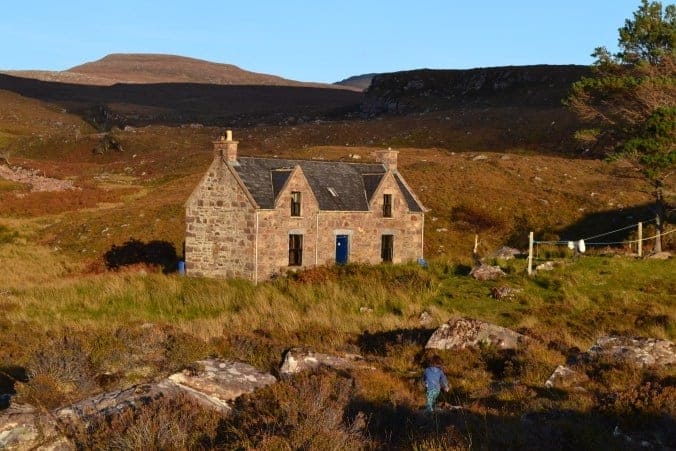 How did you organise and fund the adventure?
As adventures go it wasn’t expensive to fund. The money we were awarded from the Next Challenge Grant just about covered our fuel costs and accommodation was free! I already had some basic backpacking equipment so the only other notable cost was in getting Finn some decent walking shoes and warm, practical clothing, which although relatively expensive has been a good investment. As for organisation, we just fitted the bothy nights around our commitments at home. The worst part of organising our adventure was packing. Packing for two and for all possible eventualities was a challenge, but after our first bothy trip I made a comprehensive kit list which has made our subsequent adventures a lot easier to organise.

Have any of your adventures gone wrong or not to plan?
There’s never been any huge disasters but most of our adventures don’t go to plan, which is the reality of adventuring with a little one I think! The challenges have changed as my son has got older though. Our very first camping trips with him as a baby were plagued by illness. On our first two day camping trip I spent the whole night going between the toilet to be sick and our tent to breastfeed our 6 month old. A year or so later, it was my son who was sick overnight, all over his sleeping bag, the sheepskin he slept on and the tent. There was nothing to do except mop it up as best we could with spare clothes and wait until morning.

What is the biggest challenge when it comes to adventuring with a little one?
For me it’s keeping my patience. We are both fiery, strong willed characters and things can get rather intense if I don’t practice patience and remain flexible. 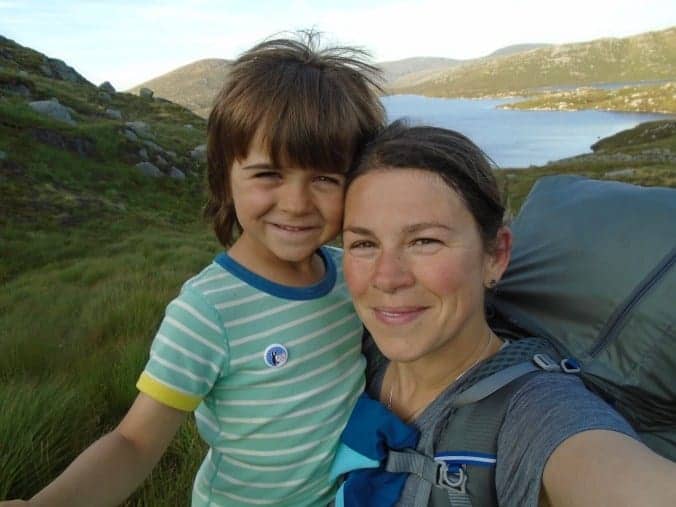 Any tips for other mums who want to do the same – any gear that is really worth taking?
I’ve discovered you really don’t need as much gear as you’d think when adventuring with a little one and it pays to travel light anyway as you’ll be carrying almost everything for the both of you. I’m probably a little more conscious of safety than I used to be and whereas I might skimp on extra clothing I always carry multiple items for Finn as he has a tendency to get wet and muddy. I’ve invested in a few key items such as merino thermals, a good quality fleece and synthetic insulated jacket but I’ve found it a real challenge to find good quality children’s technical outdoor gear, for example proper walking shoes for little feet or child-sized sleeping bags suitable for all year round use. Osprey have recently brought out proper backpacks suitable for small children so Finn got one of those for his birthday last year! 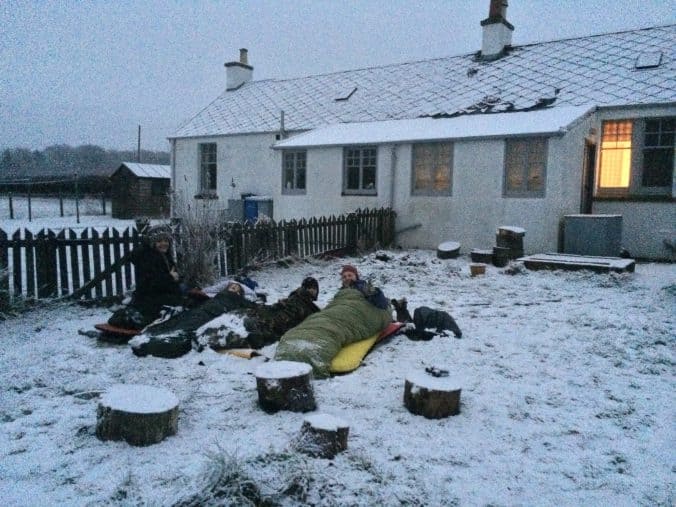 You are also a keen hiker – why solo though?
I’m a sociable introvert and looking back I realise that even as a teenager I sought time outdoors by myself to recharge. I’d also always enjoyed walking but had never walked very far until three years ago when I walked The Great Glen Way from Fort William to Inverness over 5 days while my husband and son were visiting my mother-in-law (my first break from 24/7 parenting since my son was born!) I loved the experience so much that it’s become at least an annual event and something I very much look forward to as time to think without interruption. I only ever have a week to myself at most so I can’t venture too far but since that first hike I’ve backpacked the Hadrian’s Wall Path, the Cumbria Way, the St Oswold’s Way and the first 100 miles of the South West Coast Path. I particularly enjoy the contrast between, on the one hand, the solitude of solo walking and on the other hand, the depth and intensity of conversations with people you meet. There is an irony in travelling alone that you tend to be more open and inviting to opportunities to engage with strangers and on all of my solo walks I’ve enjoyed the social connections made with people from all walks of life and the stories they’ve shared. I can’t wait for my next solo walking adventure and I dream of one day of having the time and opportunity to walk from one end of the UK to the other. 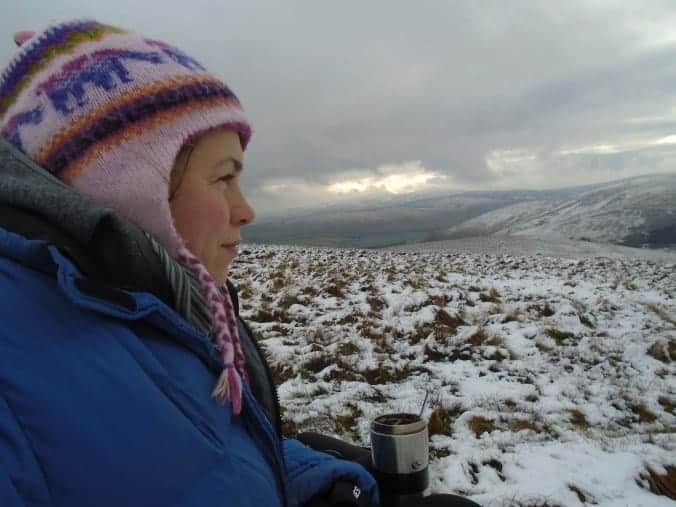 What would your advice be to your 10-year-old self?
That I don’t need to be perfect and that making mistakes isn’t a bad thing, that it’s better to make mistakes than not try something in the first place. Also be true to yourself and not worry about what others think too much.

What are your plans for the future, any more adventures on the horizon?
We’re making this year our ‘Year of Microadventures’, committing to sleeping out in our bivvy bags at least once every month throughout the year and we’ve also got some more bothies on our ‘bucket list’ to visit. We normally manage a couple of camping trips throughout the year as well and Finn has expressed a wish to climb Snowdon, which we’ll be attempting in the summer. In a year or two I want to take Finn on a road trip, camping around Iceland and I’d also like to try some adventures by a different mode of transport like bike or packraft (need both a tandem and packraft first though!) In a few years, when Finn’s a bit older I’d love to do a bigger, more challenging adventure but we’ve not decided what form that will take yet.

If anyone has any good suggestions please get in touch!

Follow Kerry-Anne and her adventures on Two Wee Adventurers. 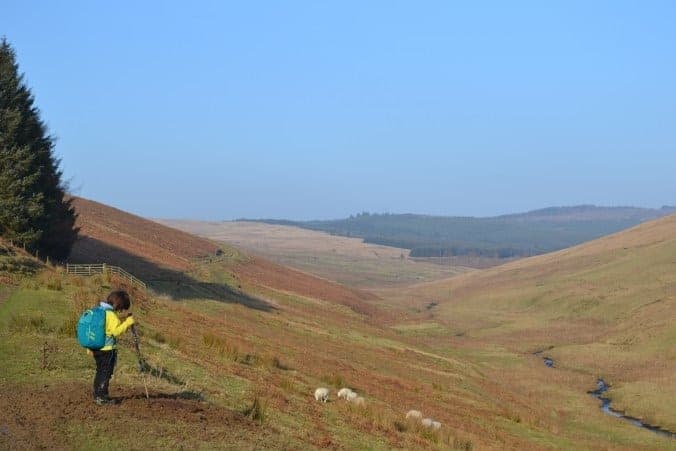