Running 250km across the Namibian Desert

In a moment of madness, I signed up to a 250 kilometre foot race that was taking place in the Namiba desert, in the Skeleton Coast National Park to be exact. The race is part of a series of races run by international company 4 Deserts.

I couldn’t even plead ignorance. I knew exactly what I was getting myself into. I first became involved with 4 Deserts in 2011, a year or so after my sister, Sam, signed me up to volunteer at one of the races which took place in the Atacama Desert in Chile. Sam manages the races alongside a team of fantastic individuals who work hard to make it look effortless. A volunteer’s duties involves manning checkpoints, handing out water, making sure everyone arrives safely to camp every day and assisting in the cyber tent, where competitors can message friends and family back home and upload blog posts. 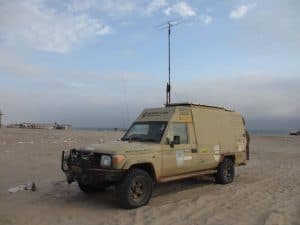 It’s long hours, but hugely rewarding and the people you meet are incredible. Through working with 4 Deserts, I’ve visited 4 continents and 5 countries including Iceland and Ecuador, where I was part of the media team, posting regular updates on social media.

All the races have a similar format. The first four days are marathon distance, followed by a twenty four hour window to complete a double marathon distance. This means walking through the night with a final 10km sprint at the end for the medal and a beer. 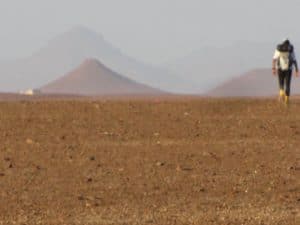 It was at the end of the Atacama race when, sleep-deprived and excited, a few of us agreed to take part in a race the following year, the 2012 race in Jordan. Suffice to say, I caught the bug and although it took me 4 years to save up the money and courage, it was well and truly time I did another one. Namibia seemed a good one to do: everyone I’ve got to know well was going to be there, good friends were volunteering and I knew they’d have my back. It was going to be warm so I wouldn’t need to carry extra weather gear, and there was no altitude to deal with.

I admit, I hardly knew where Namibia was and it was my first time to Africa entirely. I knew they were opening up the National Park especially for us but I hadn’t appreciated how unique and special this was until I mentioned it to a South African couple back in London who said the most you would normally get to see of the park is from a small plane flight over the top. Apart from the myriad shipwrecks (the reason for the park’s name), we walked through a diamond mine, admired several Welwitschia plants (known as the fossil plant, most of them over 1000 years old, some dating back from the time of Christ) and got up close and personal with a fur seal colony. Dry river beds and dunes, gravel plains and gorgeous mountains were to be our home for a very special week, sleeping in tents and carrying all provisions on our backs, including at least 14,000 calories and a detailed list of mandatory equipment, which doesn’t include many changes of clothes – what’s the point when there is no shower! 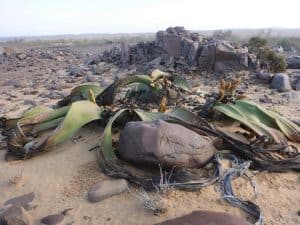 I breezed through day one – it was cool, with the wind behind us – I finished with a smile. Days two and three were a hard slog along endless beach. Once, I was so busy helping another competitor with his gear, neither of us noticed the sea come in so we got wet feet. We laughed but it could have led to disaster, as wet feet mean blisters. Blisters are simply part of the experience.

Day four was meltdown day. We’d headed inland where the breeze disappeared and it was hot. I prepared for the heat (sunscreen, ridiculous hat, electrolytes, water) but got halfway, lay in a patch of gravel, curled up and dozed. Suddenly, a cool breeze came along. I carried on. Emotionally humbled, I arrived at camp euphoric. 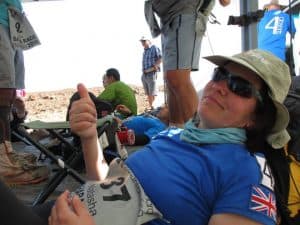 The Long Day was awesome. Starting at 8am, the dunes around us got higher and the pink markers eventually led us up a sand dune, along its ridge for 3 kilometres before running down again, filling my shoes with sand. At halfway, I ate a freeze-dried curry and set out into the darkness. Being in the dark, on your own, on the Namibian coast, plays with your mind and the strands of seaweed I passed became snakes. I caught up with two runners and we sang our way to the end, keeping the hyenas and jackals away with bad renditions of Jungle Book tunes, arriving 20 hours later at 4am for a day of rest.

Finishing these races is mental. You need physical fitness but it’s 90% mental stamina that matters. It’s amazing the limits to which you can push the body.

After a week of dried meals and porridge, celebrations were about real food….cold beers….a shower. 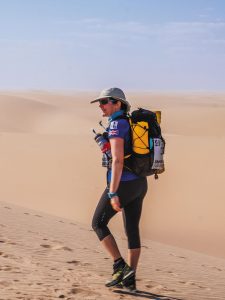 Natasha lives in south London and works on a freelance basis for a graphics company, giving her time to work on her business, which helps people to declutter and sell their unwanted belongings. Natasha is passionate about the environment and sustainability.