A Scientific Expedition Planned on the Back of an Envelope 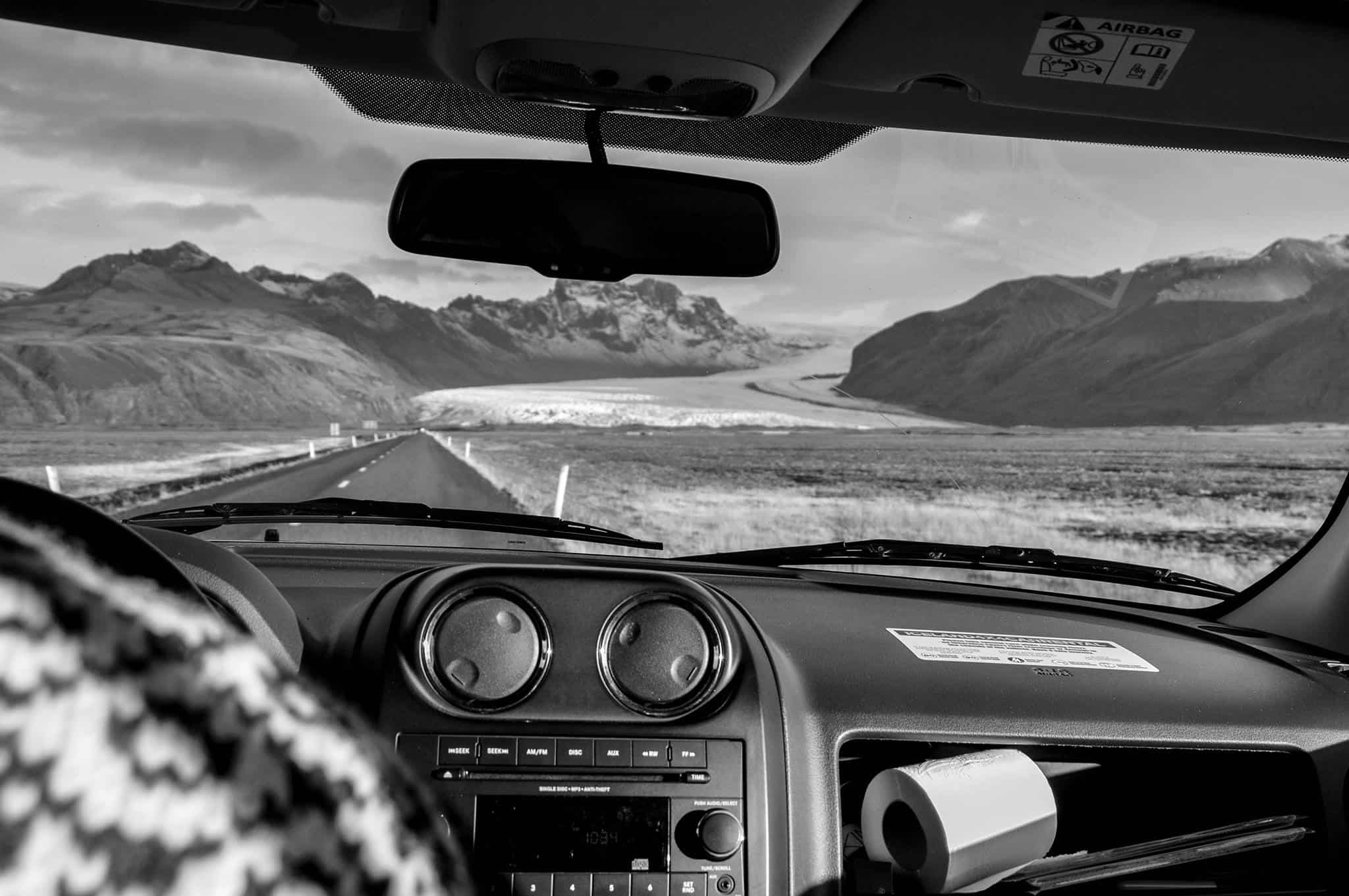 Iceland. The Nordic land of magic, fire and ice. This was my first time as a leader of a glaciology research expedition for Bristol Glaciology Centre, University of Bristol. I couldn’t have been more excited! Luckily I was heading into the field with a good team. Guillaume, a hardy, field ready, glaciology action man and Mike, another glaciologist with excellent geomorphological knowledge armed with his camera. As soon as we set off from Bristol we were focused on the task ahead; a whistle stop glaciology fieldwork trip sampling glacial sediments in South East Iceland.

A Scientific Expedition in Iceland

Flying over the island you see the dark rocky landscape, peppered by the occasional few marks of human activity. After a smooth arrival at Keflavik airport, we collected our Jeep. The car rental company warned us that it would be “a bit windy the next few days”. After laughing at thoughts of car doors flying off, we packed up, left Reykjavik and hit the road armed with enough porridge to feed thirty for a week rather than three. 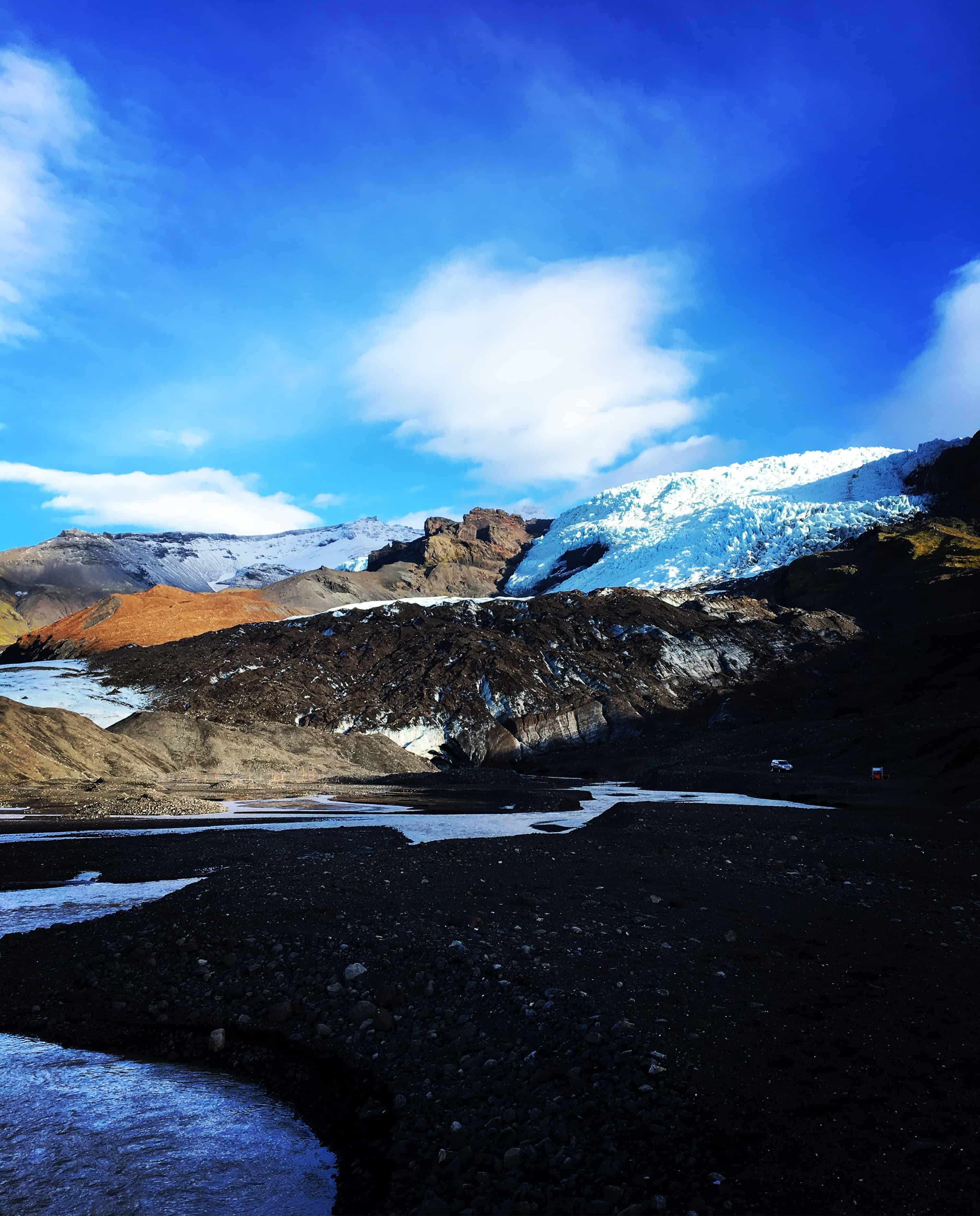 The weather looked promising for the beginning of the expedition so I decided we should aim for our furthest and most remote site, Lambatungnajökull glacier, near Höfn. This was by far my favourite sampling site. To get there we had to travel 500km to the south-east along the ‘1’ highway. On the way, the views from the road were mind boggling; steep cliffs with iron rich waterfalls, glaciers spilling out next to the highway and luminous green moss covered lava fields blending into the ocean.

After 400km we reached Jökulsarlon, a large glacial lake created by Breiðamerkurjökull glacier as it meets the Atlantic Ocean. We stopped to explore, experiencing our first taste of the howling Icelandic winds that we had heard about from the Jeep rental company. Oh how I was wrong! You really do want to make sure you hold onto the truck doors when you open them! The glacial lake is full of icebergs and apparently, you can even see wild seals. Unfortunately, in the wild wind we were too distracted by the gravel sand blasting our faces to look for too long! 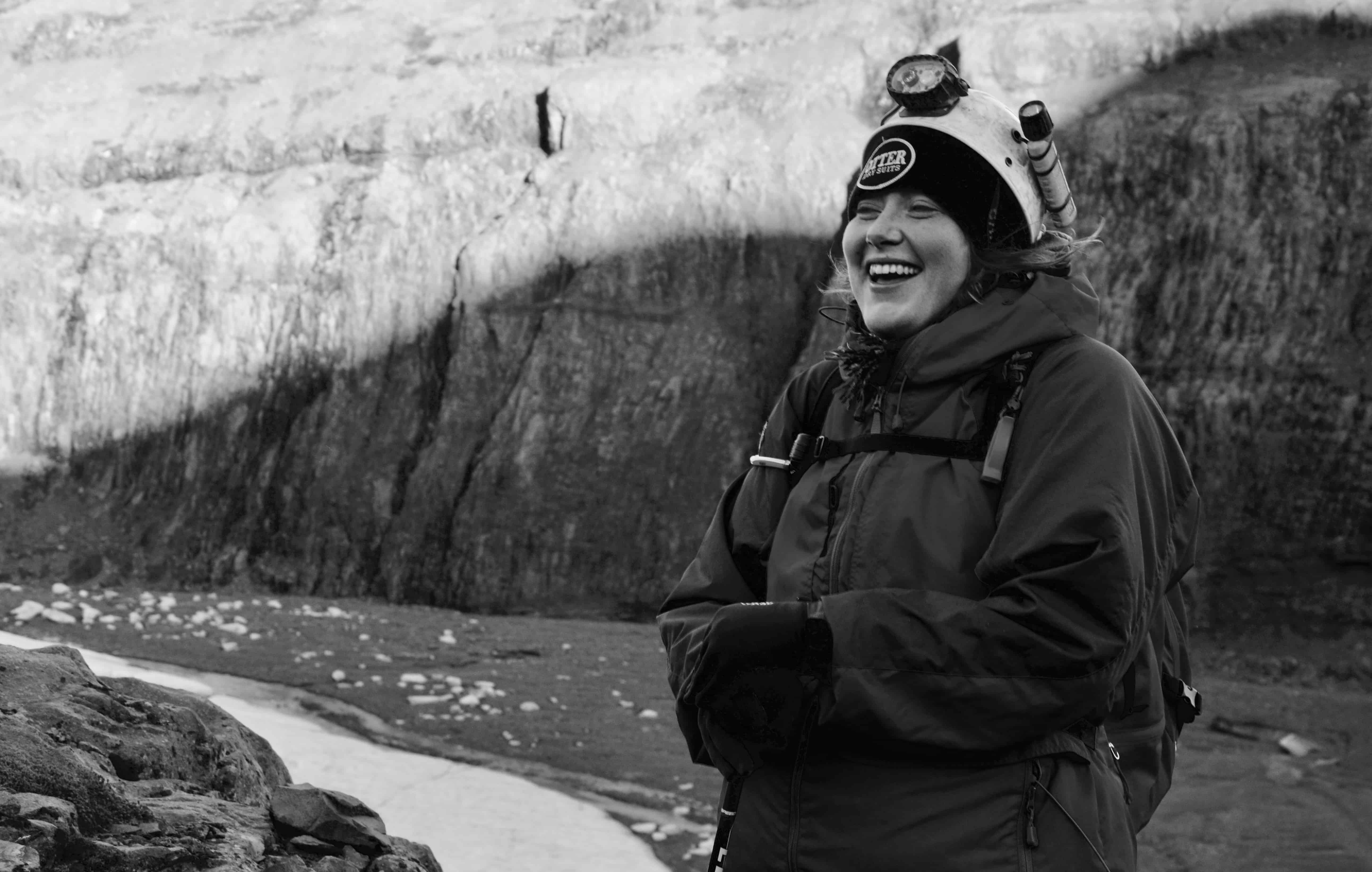 Doing Our Bit for Science

After two days we finally arrived in Höfn and prepared for the mission to Lambatungnajökull. Lambatungnajökull is an 11km long thin river of ice surrounded by steep mountains. We were told that access would be relatively straightforward; simple farm tracks through a river valley to the top of the mountain pass and then “a hop down” to the terminus of the glacier and hopefully to a suitable sample point. Lambatungnajökull hadn’t been studied since the early 2000’s so the prospect of seeing what may have changed was exciting for us all.

In the morning the weather looked good, the sun was rising and the air was calm. As we left the highway the roads began to get worse until there was barely any road at all. What was once a farm track had been washed away over the summer melt season, leaving a rocky braided riverbed behind. The Jeep and our off-road skills (particularly Guillaume’s driving) were really put to the test. Navigating the riverbed was slow going. We decided to press on until we reached a critical turning point to make it home by nightfall. Throughout the valley crossing, we couldn’t help but keep staring in awe of the amazing landscape around us. The braided river glimmered surrounded by steep valley cliffs topped by mountainous snowy peaks. We even spotted a few reindeer, common wild creatures in this area and our only company for several miles. It was an unforgettable journey.

Finally, we arrived at the top of the pass. The view was breathtaking in every direction. It was one of the most spectacular landscapes I have ever been fortunate enough to see. After enjoying it for a moment, we had to get on with what we were there for – the science! To get to the glacier’s terminus to collect samples we had to scramble down a scree slope. The boulders that appeared strong were in fact totally frost shattered and broke to bits under the slightest bit of pressure. Not ideal in a time limited scramble. 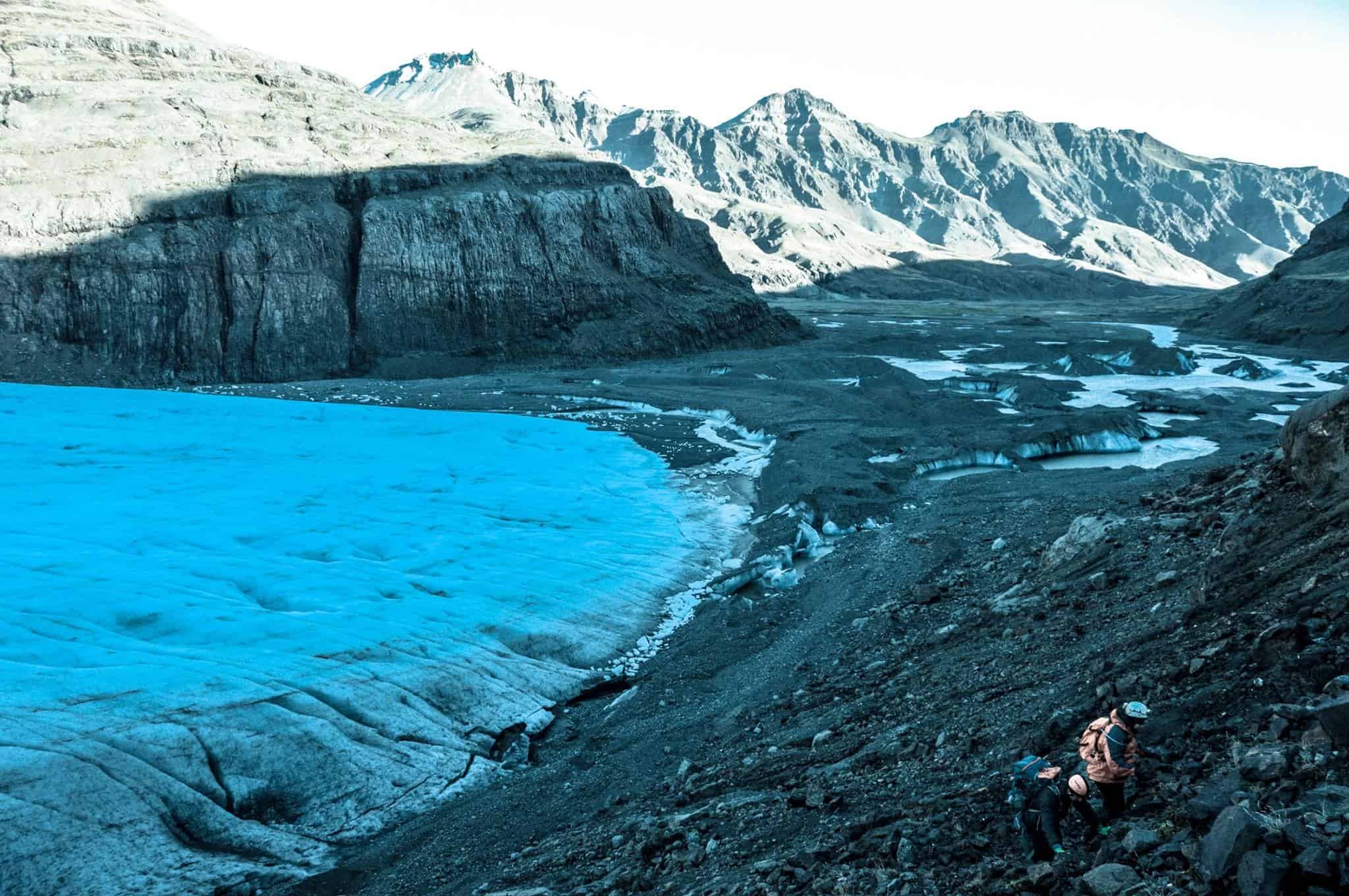 Knowing When to Turn Back

No photograph can accurately convey the fierce Icelandic winds that once again began to spit ice and dust in our faces. Katabatic winds rush down from high elevation and it is notoriously difficult to predict whether they will get worse or disappear completely. After investigating potential routes down, I decided for safety reasons we would not go any further. We struggled back to the jeep in the ferocious wind; we are all pretty certain that it was at least a force 7! The jeep doors required multiple help opening and closing – four hands rather than two!

Even though it was disappointing that we had to return empty handed, it will always be more important that our team returned safely. I would love to go back to Lambatunajökull with time on my side. I had one of my greatest days leading in the field and the whole team agreed we had seen some of the most magnificent scenery imaginable. 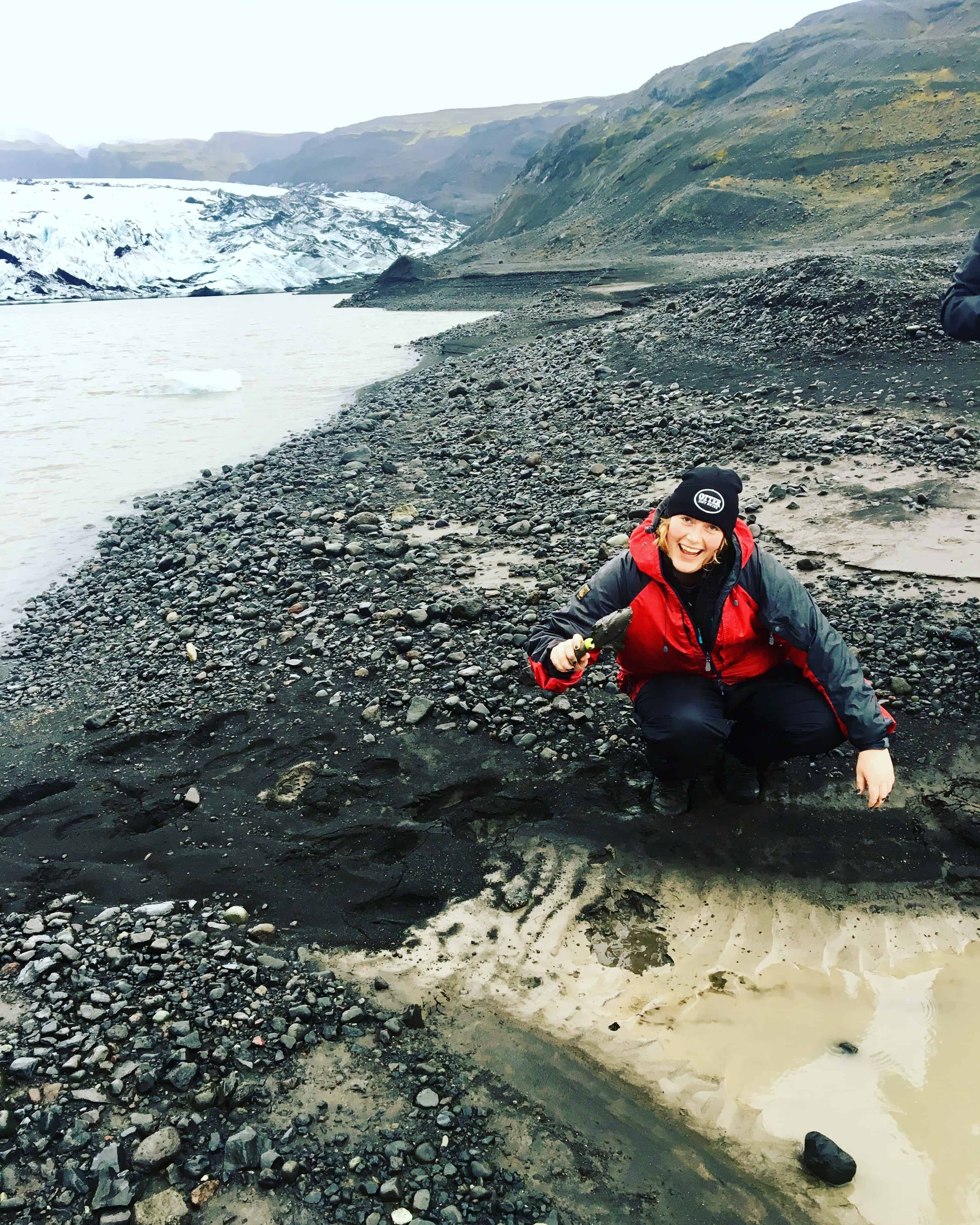 Our research expedition was successful and we came back to Bristol with all the samples we needed and more from many other glaciers. The rapidly changing conditions can appear difficult for a research team restricted by time, but they are also what sculpt the dazzling landscape. Climate change is putting more and more pressure on the environment in Iceland. With rising temperatures and warming ocean currents, there is a chance that one day in the future this infamous land forged by fire and ice will lose the latter. Through increasing our scientific knowledge and understanding, we must all hope that we can improve our global response to the threat of climate change. Otherwise, there is a chance that Iceland could become just ‘land’.

Our week-long trip to Iceland was put together for less than £400 each including flights. If you want to go explore, here is a bit of information!

Funding: This trip was funded by the University of Bristol and the Cabot Institute.  Michael Cooper part-funded his place on the fieldwork.

Flights: We flew from Bristol to Keflavik with Easyjet. They were booked last minute for £180 return per person.

Accommodation: We stayed in…

Food: We cooked a lot of our own food.

However, if you are partial to the odd beer in the evening you may want to pick up supplies at the airport on the way out. We were wondering why people were doing this and realised why after seeing the prices in the supermarket!

Sights: We were lucky to see things both on and off the tourist trail. We even had a bit of time to squeeze in a trip to Silfra – the area where the Eurasian and American tectonic plates meet!

We did not pay for any tours, however, there was everything from horse riding to helicopter trips. Even a skidoo trip onto a volcanic glacier was advertised. You could go well over budget, but it is possible to do it fairly cheaply. Especially if you don’t use so much fuel travelling 1000km!

Sarah’s first sentence was “I go dig a mud”. She now digs in mud for her PhD research based at Bristol Glaciology Centre. Sarah is happiest up mountains or scuba diving. She is also leading the Mission High Water challenge (www.missionhighwater.com).