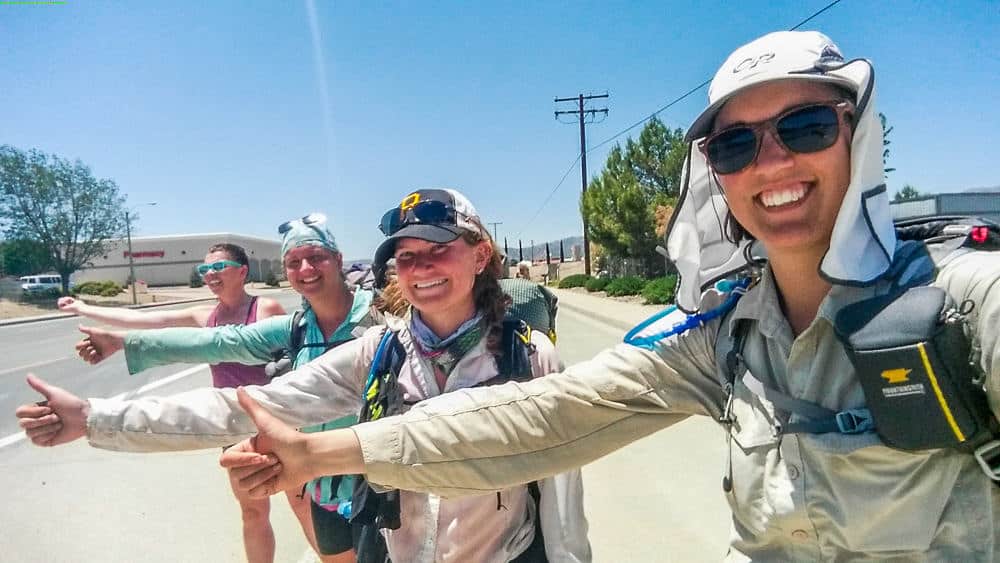 Hitching as a hiker is different from hitchhiking. At least that’s the stance I maintain for my family. Seriously though, when hitching near a large trail like the Appalachian Trail or Pacific Crest Trail, the locals know what thru hikers are, what they look like, and they are generally happy to help. Hikers spend a lot of money in town, and not just on a quick resupply before heading back to the woods. We also spend on restaurants, motels, beer, and lots and lots of ice cream. Aside from bringing business into town, people just want to help out that pathetic, hungry looking hiker on the side of the road.

I was nervous about hitching before I did it. It’s not something that is very common these days and hitchhikers are looked on as very suspect characters. Any one who picks up a hitchhiker must be suspect as well. What are they thinking? It’s so risky! Stranger danger! It’s a well known fact that only nefarious people would be involved. (Not.)

An experienced hiker gave me some tips before I tried hitching. That advice, along with attempting my first hitch with said hiker and one other hitching newbie, made me feel better about the whole situation. The three of us had been hiking in snow and mud all day so we were looking a little bedraggled by the time we got to the road. We followed his suggestions and were picked up by the first vehicle heading in the right direction! It was a spotless Suburban driven by a local contractor and he did not even blink at the state of us or our gear, despite dirty slush melting off all over the place.

After the first time was so successful, I decided that I was really good at hitching and it was one of my favorite activities on the trail. I gained a lot of experience over my two thru hikes and came up with a never fail strategy to get a ride, usually in the first ten minutes: 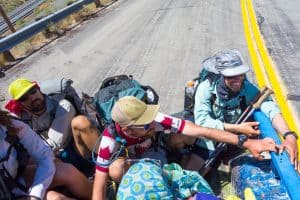 It’s not fair, but women are seen as much safer than men. How many female serial killers can you name? And not only is that girl on the side of the road with her thumb out nonthreatening, but people want to look out for her. I can’t count the number of times I got picked up immediately by an older woman who then lectured me for the whole ride on the dangers of hitchhiking.

Lady hitching is so easy.  If you happened to have been born with the wrong equipment and cannot follow Step 1, try Step 2.

Step 2: Travel with a female.

You might look like a large, bearded, scary man, but that girl standing next to you gives you credibility. Assuming she is not a kidnapping victim, her presence states that you are not a serial killer either. People’s protective instincts still kick in for her and you both get a ride.

These guys definitely had a better chance at a ride with her. 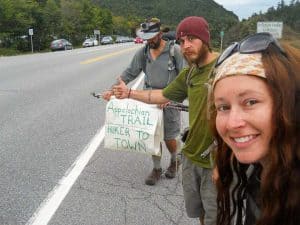 Okay, that’s it. Get out there and hitch! Just kidding. Steps 1 and 2 are very true, but there is a lot more to it than that.

I realize you may have been in the woods for a week but you need to make yourself presentable. Hats and sunglasses off, jacket collars down, and tame that hair. Wipe off as much mud and dirt as possible. Above all, smile! You need to look like an approachable, friendly, normal-ish person.

Cleaned up as much as possible. 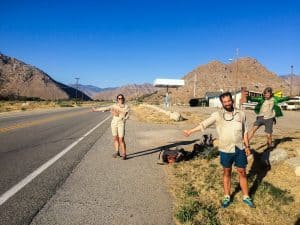 Step 4: Make it clear that you’re a hiker.

Keep the pack front and center. 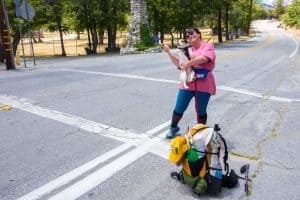 Help them help you. Don’t stand just around a blind corner so that the car is already past you before the driver even realizes you want a ride. I have had people turn around to come get me, but a lot will just shrug and keep going. Make sure there is plenty of room in the road for the driver to have time to notice you, determine that you want a ride, and make the decision to stop.  And make sure there is somewhere for them to stop.  Stand at the edge of a parking lot or driveway for the driver to pull into, or next to a wide shoulder. If there is nowhere for the car to safely pull over, they will probably keep on going.

Plenty of room to pull over here. 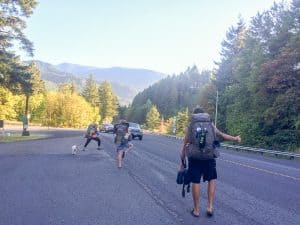 Step 6: Split up your group.

Hiking with a large trail family?  That’s great, but it can be intimidating for drivers.  They may assume you all want the same ride and won’t stop if they don’t have room for everyone.  It’s better to stick two or three people at the road and have the others wait some distance away.  If there’s room for more than two or three, great!  Ask if you can all hop in.  If not, when the first batch goes, send the next one out for another ride.  It’s easy to meet back up in town or at the trailhead.

This hitch took a while. 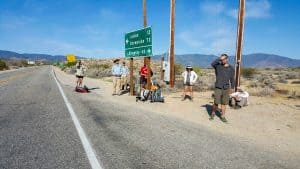 Step 7: Stick your thumb out.

Obvious, right? When I first started hitching, I made it a game to see how many people I could get to stop without even sticking my thumb out. I would smile and wave, in what my frequent hitching partner said was a very confused manner (I disagreed, I thought I was just friendly), and people would stop and ask if I needed something. I realized that it’s better to make it obvious that you want a ride. That way you’re not wasting their or your time by getting them to stop because they think something is wrong when they don’t actually want to offer a ride. Sometimes I would still wave people down if I just needed information, but if I wanted a ride, my thumb would be out. 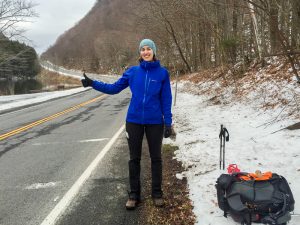 One of the tips I heard about hitching was to use my tent’s footprint as a sign. I wrote in large block letters on either side “HIKER TO TRAIL” and “HIKER TO TOWN” so that it would cover all of my hitching needs. I would only use the sign if the hitch involved more than just going down the same road I was standing on, or if I had been trying to get a ride unsuccessfully for more than ten minutes. I didn’t have to break it out much. Other creative signs that I saw hikers use successfully were “I’M HUNGRY,” “FRIENDLY / WON’T KILL YOU,” etc. 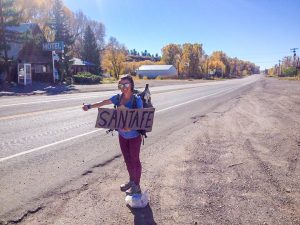 In addition to funny signs, I also knew hikers who would do choreographed dances to get attention, or mime different actions like pulling a rope across the road. If you can make the driver laugh, they will probably stop and help you out.

Dancers on the highway. 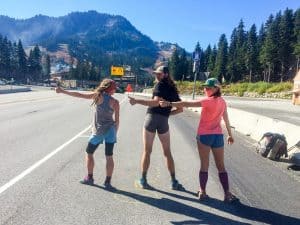 Finally, be careful. I try to always hitch with a partner but sometimes it wasn’t possible and I hitched alone. Remember that just because someone stops, you are not required to get into their car. Follow your instincts. If you get a bad feeling about the person, just say no. You can pretend you are waiting for your three large male friends, or say you just realized you left something important back down the trail, or say you changed your mind about going to town. Do what seems right for you.

A version of this article first appeared on www.wayfarer.me.

Mainly long distance hiking, but up for any outdoor sport, Kristin has made adventure a priority since 2013. Her passion is getting more people outside. The more people that get out and enjoy our natural world, the more they’ll become invested in protecting it.