A Memory of Witches: Hiking the Harz Mountains 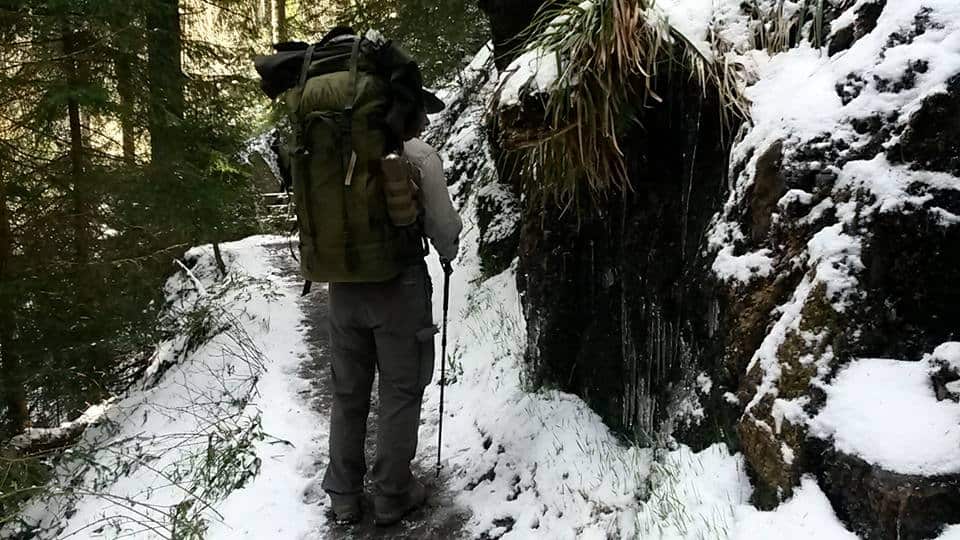 “So, I need to test this shiny new tent out – fancy thru-hiking a trail up by you?”

Those famous last words to my long-time friend and partner in (mis)adventure, Al, back in January were the reason I found myself wandering around Osterode am Harz, sleep deprived, cold, and wondering what on earth I had let myself in for as he casually mentioned that the forecast for the day included snow. In April.

This was going to be good.

The Harzer Hexenstieg, or Witches Trail, is a 100km (62mile) designated trail running from Osterode to Thale in the Harz mountains of Germany. We had found out about it mostly by accident, but some judicious Googling had informed us that the route was well maintained and signposted, with plenty of options for accommodation. The plan was to walk what we can each day, camp where we can, and get from Point A to Point B before I miss my flight home.

If you look at a weather map of Germany, the Harz are always easy to spot because they stubbornly remain a good 5-10 degrees colder than everywhere else, so we knew we were in for a chilly few days. We barely got out of town before the first flakes of snow started to fall. 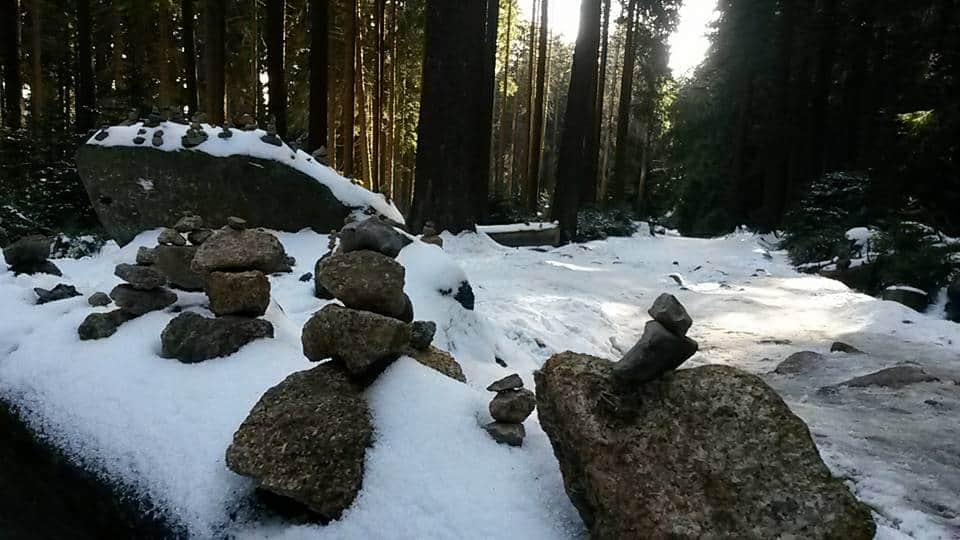 “Clear weather in April, huh?” I snarked at Al, but it was with a grin.

We signed the trail register at the first pass, tightened up our packs, and then began properly motoring to make it to our first stop at Polstertal, a solid 20km away. The trail was wide cinderpath for the most part in this section and pretty uneventful, so we used the time to catch up, crack jokes, and quote Pratchett at each other (because that’s what you do on an adventure), eventually arriving at the campsite just before sundown. We could feel the temperatures dropping below freezing but figured our kit would hold up – it was good down to -6, and it was April, right?

The short version of that night outside is that by 1am I was so desperately cold I could barely think straight, so cursing myself for a wuss I took my rollmat and sleeping bag and went to sleep in the toilet block where there was a radiator, and felt like a complete failure.

After spending the night in a toilet, I decided that if the owner of that chirpy voice continued being cheerful I wouldn’t be held responsible for my actions.

“Minus 8.5 on my thermometer this morning, would you believe?”

Well. That explained why it felt so cold. Feeling a bit less like a loser, I went back outside to find Al and our tents, which had frozen completely solid overnight. A quick conversation over the campstove confirmed that even he had had trouble, and woken to find a rather pretty layer of frost over the outside of his sleeping bag. As you do. 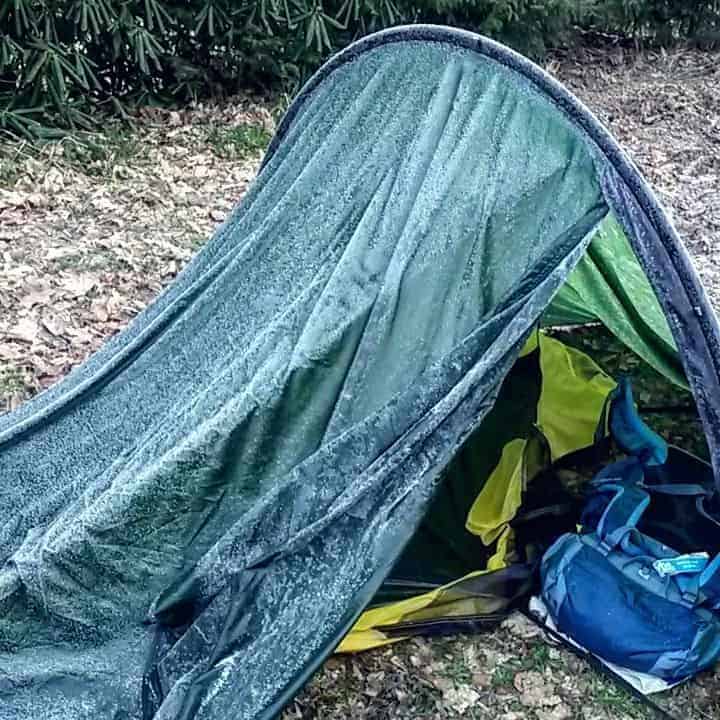 Chalking one up to experience, we packed up and rocked out, but with the tents wetted through and temperatures set to stay well below zero, one thing was for definite – we were finding an actual bed in an actual building for our second night.

Despite the somewhat bumpy start, the second day on the trail was a gift.

Winding up out of Altenau through the forest, the path became progressively narrower and wilder as we gained altitude heading towards the Brocken, the highest point of the trail. Traversing the valleys eastwards along a single track cut into the stone, we found ourselves hiking on a mixture of rock and hardpack snow beneath the trees.

Now, those who have had the misfortune of hiking with me on snow and ice before will know that I take to it about as well as a bear with a hangover. It’s not pretty.

Thankfully, Al had brought walking poles with him and was able to loan me one. It wasn’t much, but it was enough to stop me sliding off the trail, and meant I could spend the time fully appreciating just how breathtakingly gorgeous the views were. 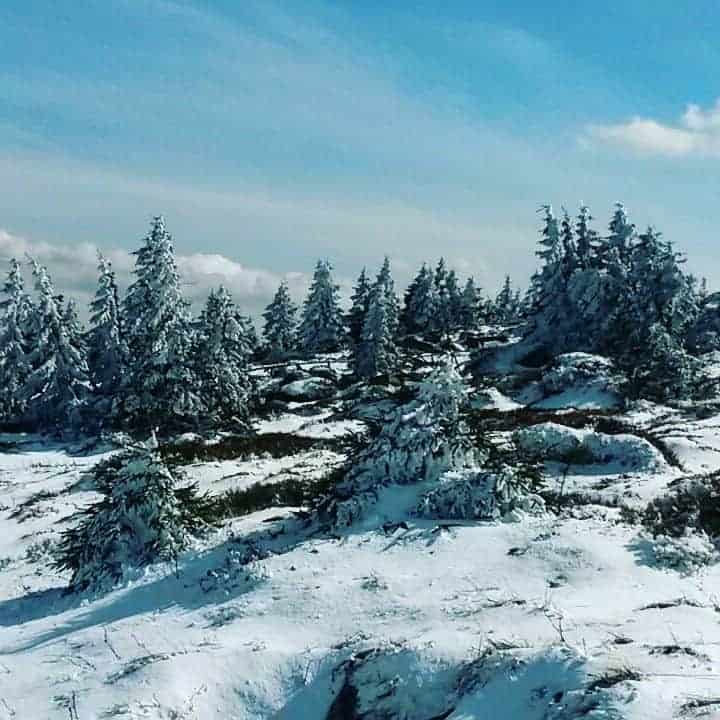 Having spent most of the day well away from civilisation, it came as a shock to suddenly be surrounded by people when we reached the base of the Brocken. Around the size of Snowdon, it remains popular with locals and tourists alike and was utterly magical in the deep snow.

We located the summit stone, took the obligatory photos to prove we’d been there and admired the views of the mountain range that the clear weather offered, before beginning the descent towards our next stop following a cross-country ski track through the forest – complete with its own colony of trolls – before ending the day in Schierke. 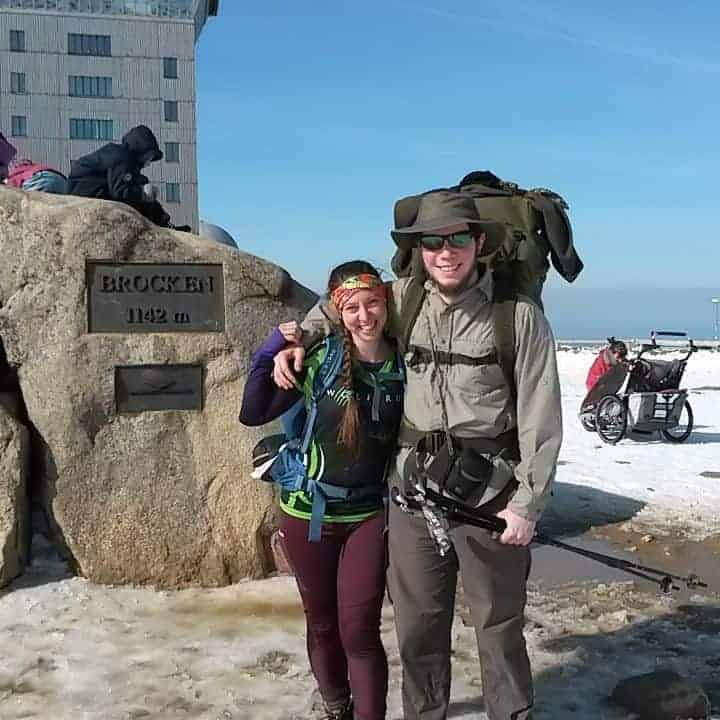 Knocking on the door of the first guest house that looked promising, we were bustled inside by an adorably rosy-cheeked elderly couple who assured us that yes, they had a room, and of course it came with breakfast, and how far had we walked today, and would we like dinner now or later?

“This is going to go one of two ways,” Al and I agreed as we dumped our rucksacks and investigated the shower. “Either we get the best night’s sleep ever, or they’re going to cook us and eat us.”

Big Miles and Near Disaster

The third day on the trail we descended further into the river valleys we had the pleasure of moving through the seasons from deep winter higher up into lush beech woods carpeted with wildflowers. The wider and smoother paths, and the easier ascents and descents made for easy, if uneventful walking. We kept ourselves entertained by spotting wildlife, abundant singing, and quoting Pratchett again. 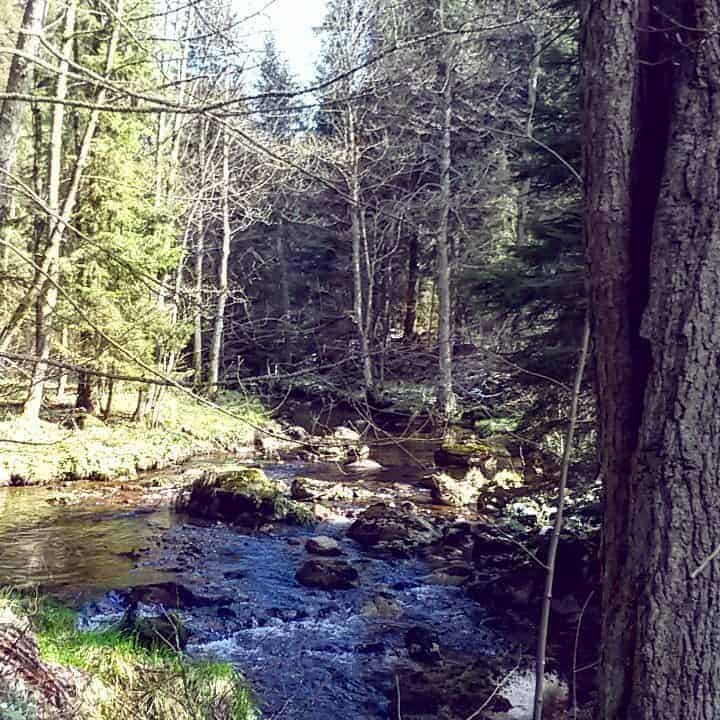 Eventually, we were treated to some pretty spectacular views the Wendefurth dam, before finally dropping down and crossing over it. It was at this point that our day began to go downhill.

Germany does not permit wild camping, and there are hefty fines for anyone found pitching a tent anywhere but a designated site. There are none in Wendefurth, and with the evening drawing in decided that a second night in a guest house was the next best option. Unfortunately, despite being a designated stop on the Hexenstieg, Wendefurth, was shut hours ago.

We had been relying on at least being able to resupply in the village but making a swift back-up plan, we decided to make for the nearest Schutzhütte. These wooden structures are dispersed every 15km or so along the major trails in Germany, and vary in quality from glorified picnic shelters, to solid little cabins with open spaces for the door and a firepit out front. We knew there should be one within about 6km where we would be able to stay for the night, but had no idea where.

Striking out towards the next point on the trail, we stopped to ask directions of a man who was packing up after spending a day fishing on the nearby river. After a brief conversation, it turned out he was an American teacher at a school nearby, and he offered us a lift to Altenbrak where we were more likely to find food and somewhere to stay for the night.

We found somewhere quickly and in short order were tucking into an enormous plate of Spätzle and venison stew at the Jodelmeister Inn. There was indeed yodelling. There was an accordion. Luckily there was also schnapps.

After our somewhat eventful previous day and unintentionally getting 6km ahead on the trail, we only had a short 15km hike to get to the endpoint at Thale on our final day.

This turned out to be an unexpected boon as the last section of the Hexenstieg passes directly through the Bodetal, a spectacular ravine cut from the stone by the river. This part of the Harz was beloved by the Romantics, with a plaque dedicated to Goethe placed prominently at its northern terminus. It isn’t difficult to see why. We dawdled our way through this last section, not really wanting it to end. Every corner we turned there was another vista, or another clearing full of sunshine. 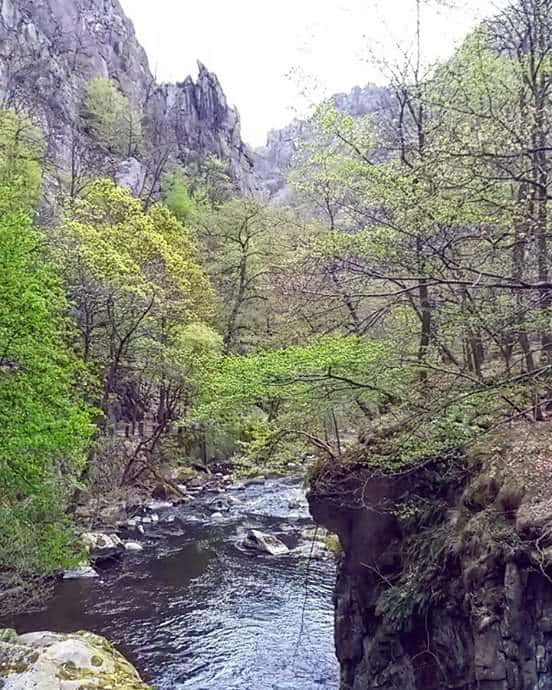 The last part of the Hexenstieg meanders through Thale itself before ending at the church. In keeping with the witches theme, the grounds are full of wood and metal sculptures of mythical characters – we spotted ravens, dwarves and a giant Sleipnir.

Together we had covered the better part of 100km, two seasons, several mountains and a proper adventure. After all of that there was only one course of action: set up camp; make for the local thermal baths for a good long soak; and eat our own body weight in pizza. 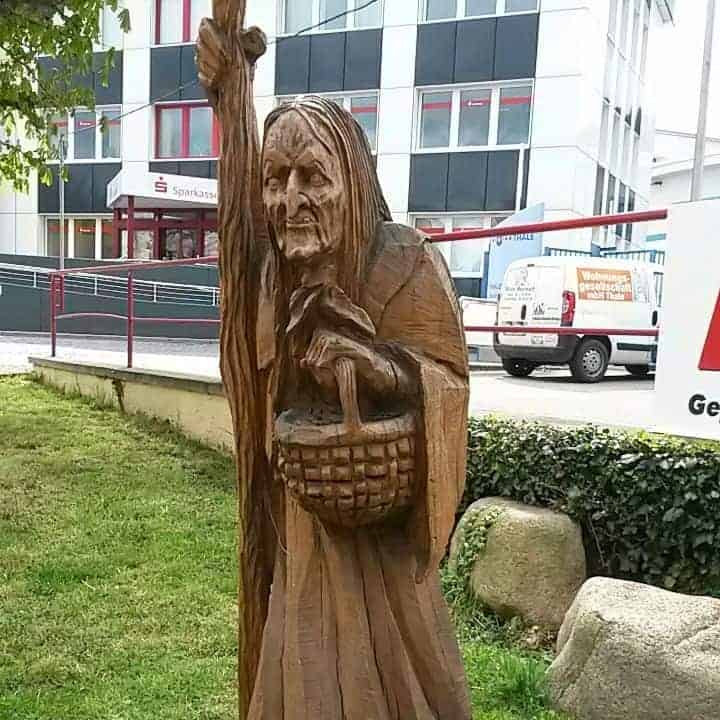 For anyone thinking of heading to Germany to do some hiking, I would thoroughly recommend the Harz as a great place to start.

Flights to and from Berlin are pretty cheap out of season from the UK (I got a return from Birmingham for under £100), and from there you can take one of the regular regional trains to Osterode for the start point of the trail. Likewise, there are trains to Berlin every hour from Thale, including Sundays.

I was able to do 4 days hiking on a 36L pack carrying 3 season gear, but if you go outside of the main season it’s worth considering proper winter kit for camping – sleeping in -8 degrees was not fun without it.

Guesthouses are abundant along the route and priced at around 70 euros for a room, or campsites are less common but priced at around 20 euros for a pitch (based on 2 tiny tents or one big one). Alternatively, anyone wanting more of a wild camp experience can make use of the Schutzhütte, but it’s worth bearing in mind that they’re not always marked on the map and can be intermittent depending on which route you take.

However you choose to tackle the Harz, it is worth the trip. These mountains inspired fairy tales and poets, and no matter what time of year you visit, I guarantee they will make you believe in magic again.

Leah is a linguist, runner and poet. Originally from Devon, she is happiest when at least 65% covered in mud.